2500 witches were executed in Scotland

Probably at school you read Arthur Miller’s play the Crucible? And because of this you know that in 1692/93 in Salem, Massachusetts, 200 people were accused of witchcraft and 20 were executed? And maybe you were in the 1990 Kaipara College staging of the Crucible and had to play the sensible killjoy Elizabeth Proctor when really you wanted to be Rebecca Nurse and act all kinds of hysterical?

But I digress. Witches were killed in Salem but the same thing happened in Scotland. Between 1590 and 1662, 4000 people were charged with witchcraft and 2500 of them were executed! Because I am really not very wicca1 I didn’t know this and when I found out I went WOAH. I was launched by the WOAH into a period of obsessive, nerdy, supernatural Scotland research and I found out lots of interesting and awful stuff. I also found a personal connection.

In this post I’m going to share what I learned. Breathe easy, it’s not going to be any kind of berating feminist systemic bias power structure religious persecution patriarchy colonisation essay (although it could easily be). It’s just the story as I understand it.

In Europe witch hunting happened mainly in the 16th and 17th centuries at the time of the Reformation and counter-Reformation. Rival Protestant and Catholic countries were trying to prove their superior godliness so went hardcore in the stamping out of sin, sinners, superstition, magic, generally just anything perceived as heathen and evil.

After the Reformation Scotland was a Protestant country, quite serious about it and quite competitive in the holiness arena so its sin hunting was severe. The statistics are worth repeating – 4000 witch accusations and 2500 executions and this from a population of only a million. The overwhelming majority were women. 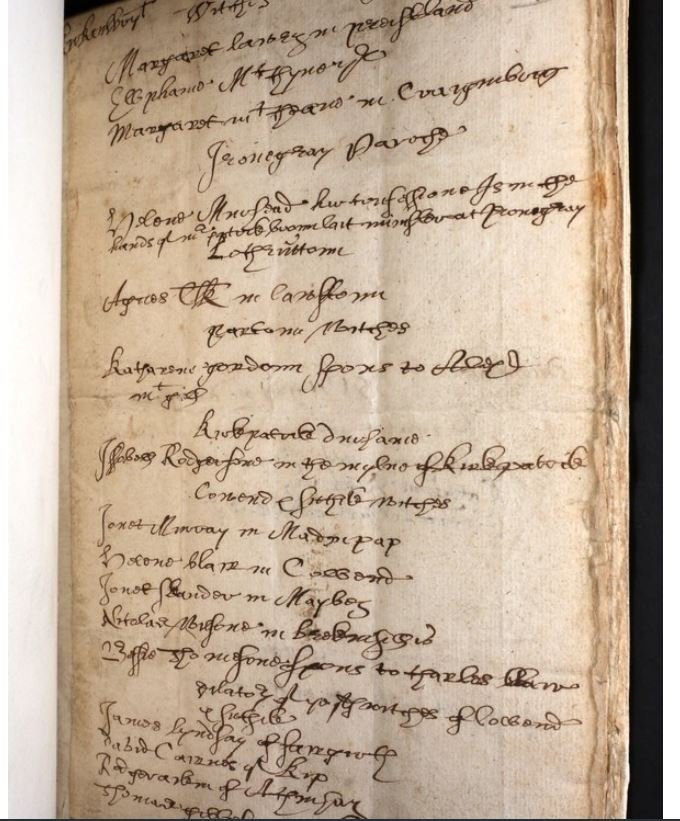 A page from the 1658 book Names of Witches in Scotland.

Witches were killed mostly by being strangled then burnt at the stake, and at a rate about five times the European average. So yes. Quite severe.

The Scottish had two main ideas about what witches were. Ordinary people - like crofters, fisherfolk, weavers, spinners, domestic servants and farmers - considered a witch to be someone who harmed their neighbours. Magical powers themselves were no big deal and not an issue when applied to healing and helping.2 Nasty and vengeful stuff like causing bad weather, killing livestock or spreading disease were really not cool though.

The working class did not particularly think a  witch should be executed. Instead a kind of intervention was preferred in which community members tried to coax them back into the light and then they all made friends. This approach made sense because magical power was considered to be something an individual was just born with. Those in whom it resided had agency over its use.

Wealthy, flash people – like royalty, the nobility, landowners, the clergy - had a completely different idea about witches. They didn’t differentiate between good and bad magic nor think it was personal. It all came from the Devil and those with it had sold their soul to Satan to get it. Witches were also seen as a secret heretical group; influencing not just their neighbours but conspiring against society as a whole. MWAHAHAHA. 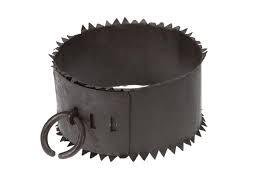 The upper class belief in and fear of evil was a real thing. When combined with threats to the social status quo and Protestant efforts to be the best at God, they got really freaked out. So suspected witches received a visit from hired goons who’d been told by their bosses that witches never worked alone. This meant when one was found they were interrogated for the names of accomplices.

Interrogation is just a nice word for torture. The most common type in Scotland was sleep deprivation and it was really effective. Witches without sleep for three or four nights inevitably started to co-operate with their interrogators (go figure) and with prompting told credible witchcraft stories and gave names. Here’s a 1644 testimony -

Thou hast confessed that ... thou and the rest of the witches dug up corpses of deceased persons, from whom you took members to accomplish your Devilish designs; at your meetings you blasphemed God’s name and you used to drink and dance; Mallie Paterson rode upon a cat, Janet Lockie rode upon a cock, thy aunt Margaret Watson rode upon a hawthorn tree, thou thyself rode upon a bundle of straw, and Jean Lachlan rode upon an elder tree.

The authorities then picked up the accused (look out Mallie Paterson, Janet Lockie, Margaret Watson and Jean Lachlan!) and tortured them for the names of other witches, who they then captured and then tortured for more names and so on.

Surprise! This approach resulted in a massive increase in witchcraft accusations, often in a particular locality. This caused non-witches living in the same place to panic. Soon all the local panicking joined up and caused a hysteria which engulfed the whole country.3 In 1563 the Scottish Parliament made witchcraft illegal, punishable by death.

The whole thing reached peak national paranoid black magic shitstorm in 1590 when King James VI of Scotland decided he and his bride Anne had been personally targeted. The King believed witches had conjured dangerous storms to try to kill them as they voyaged across the North Sea. His suspicions were confirmed when an accused witch named Agnes Sampson confessed (fyi under torture) that she and 200 of her sin sisters had gathered the coastal church of North Berwick on Halloween 1590. There the Devil had preached to them, boiling their blood lust, charging up their evil powers and ordering them to destroy the King. 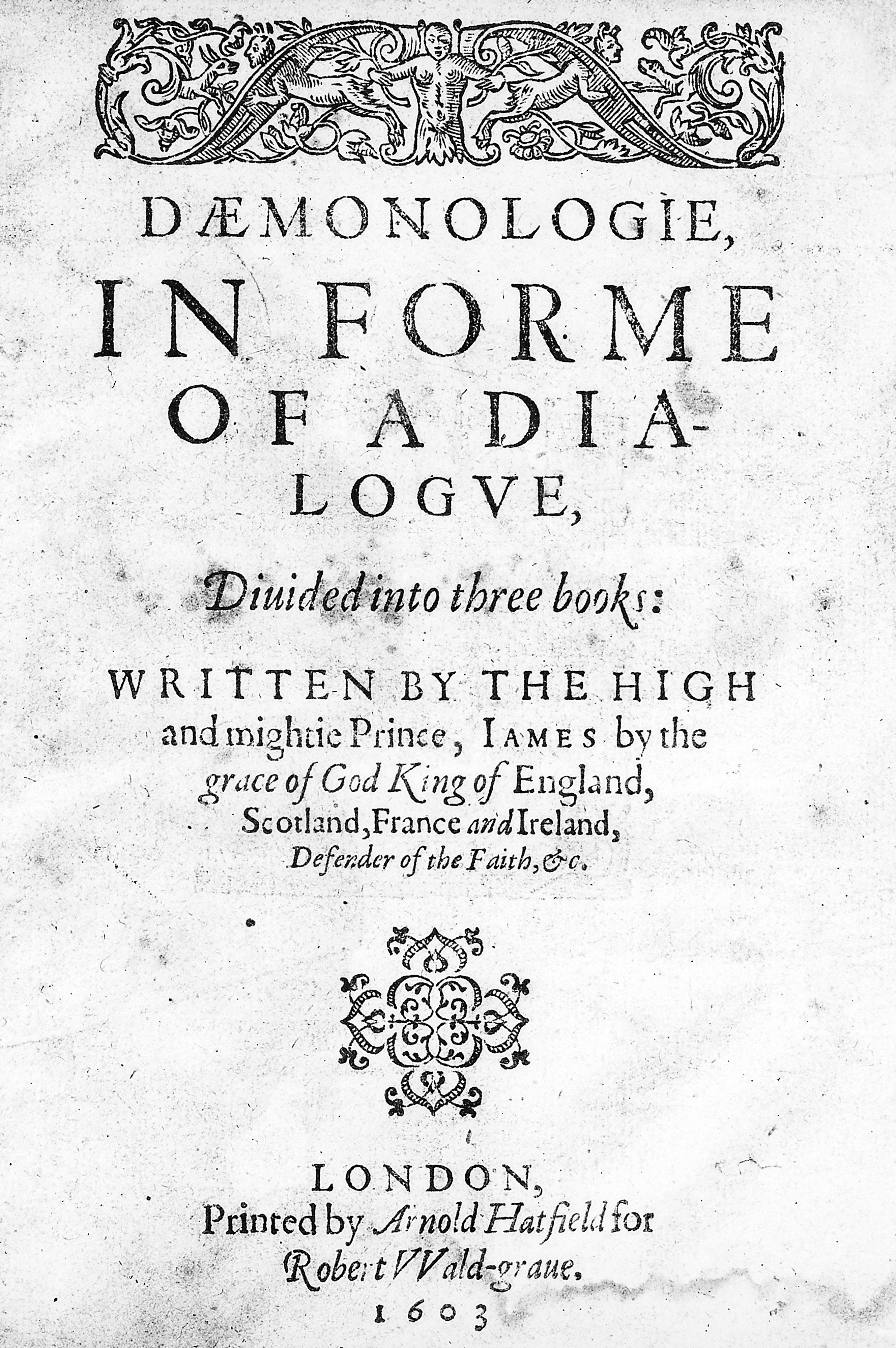 King James was both alarmed and flattered to be considered Satan’s greatest mortal enemy. In response he wrote and published the three-book treatise, Daemonologie (full text here). It asserts the King’s total belief in magic and witchcraft, aims to prove their existence and lays down his views on appropriate punishment. I.e. death.

The feaefull aboundinge at this time in this countrie, of these detestable slaves of the Devil, the Witches or enchanters, hath moved me (beloved reader) to dispatch in post, this following treatise of mine…to resolve the doubting…both that such assaults of Satan are most certainly practised, and that the instrument thereof merits most severely to be punished.

King James also personally attended witch trials quite often which was unusual for a ruler. He was proper obsessed.

From 1664 to 1694 Renfrewshire was considered the Scottish centre of black magic. The district contains the towns Inverkip, Paisley and Greenock, and at the time all were absolutely riddled with witchcraft.

Greenock is where my mother’s family comes from and where many of them still live! It's an industrial town by the Firth of Clyde, west of Glasgow. A few fun facts – Greenock was the site for the Firth’s first dock; has some stained glass windows by Dante Gabriel Rossetti; and is home to the world’s foremost Robbie Burns Club.

A very famous witch called Mary Lamont also came from Greenock (probably not a relative). Her tale is one of reputed wickedness and horrible injustice and I’m going to share it now.

As a teenager Mary was accused of witchcraft. Her offences included dancing; drinking wine; shape shifting into a cat; throwing cursed sand; stealing milk by magical means; having sex with the Devil while he was in the form of a large brown dog; and answering to ‘Clowts’ (the nickname Satan gave her, perhaps in a postcoital snuggle). Mary also confessed (fyi under torture) to trying to throw the Kempock Stone into the sea to sink ships and kill sailors.

The Kempock Stone is located in Gourock behind a regular urban street. It’s six feet high and is the ancient remnant of a druidic altar to the fire god Baal. The megalith stayed a site of ritual for many years, for example pre-journey sailors would walk around it seven times to ensure favourable winds.5 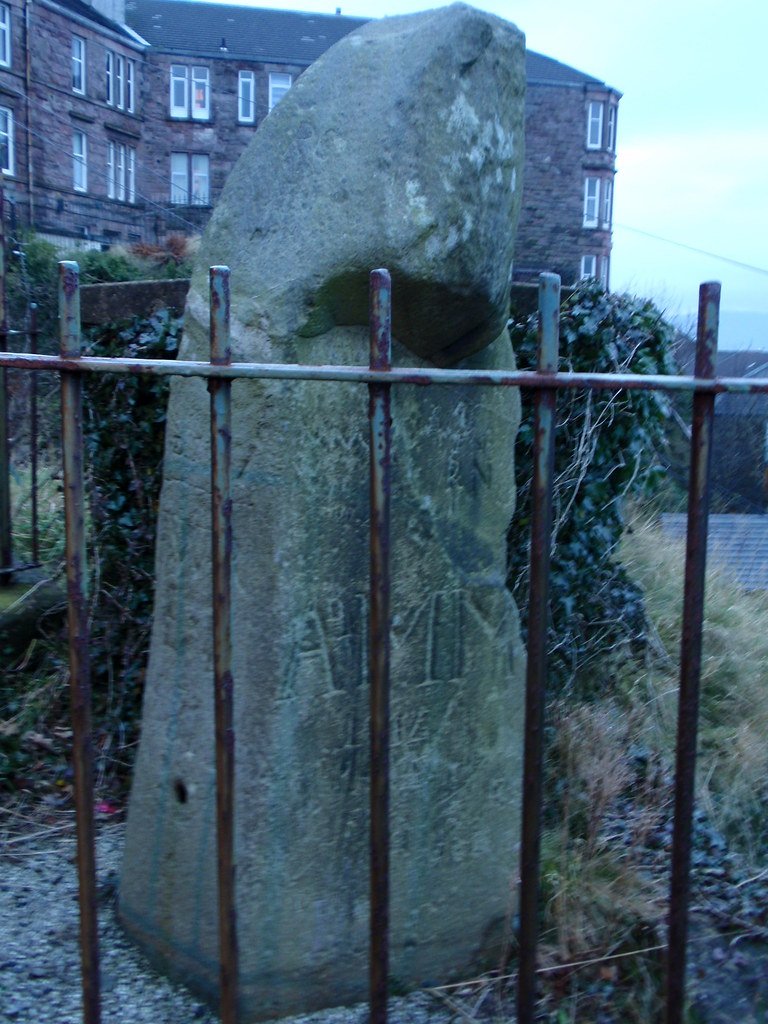 The Kempock Stone, fenced for protection from vandalism

Although the official records are lost it’s safe to assume Mary was found guilty of all these diabolical deeds and was burned at the stake. But she was tough and powerful and during the full moon can still sometimes be seen dancing around the Kempock Stone.

The end of the frenzy

There was not really any big dramatic ending to the Scottish witch-hunt debacle. King James IV of Scotland became King James I of England, got distracted writing his bible and shifted his conspiracy obsession to the Catholic Church. His lack of interest meant witch hunting was no longer trendy and it just become an old-fashioned thing.

The last witch known to be executed was in 1727 and in 1736 the British Parliament repealed the 1563 Witchcraft Act.

But one important thing did happen earlier this year. Nicola Sturgeon, the first minister of Scotland, issued a formal apology on behalf of the government for the historic persecution of those accused of witchcraft. In it she was emphatic -

It was injustice on a colossal scale…at a time when women were not even allowed to speak as witnesses in a courtroom, they were accused and killed because they were poor, different, vulnerable or in many cases just because they were women .As first minister, on behalf of the Scottish government, I am choosing to acknowledge that egregious, historic injustice and extend a formal, posthumous apology to all those accused, convicted, vilified or executed under the Witchcraft Act of 1563. 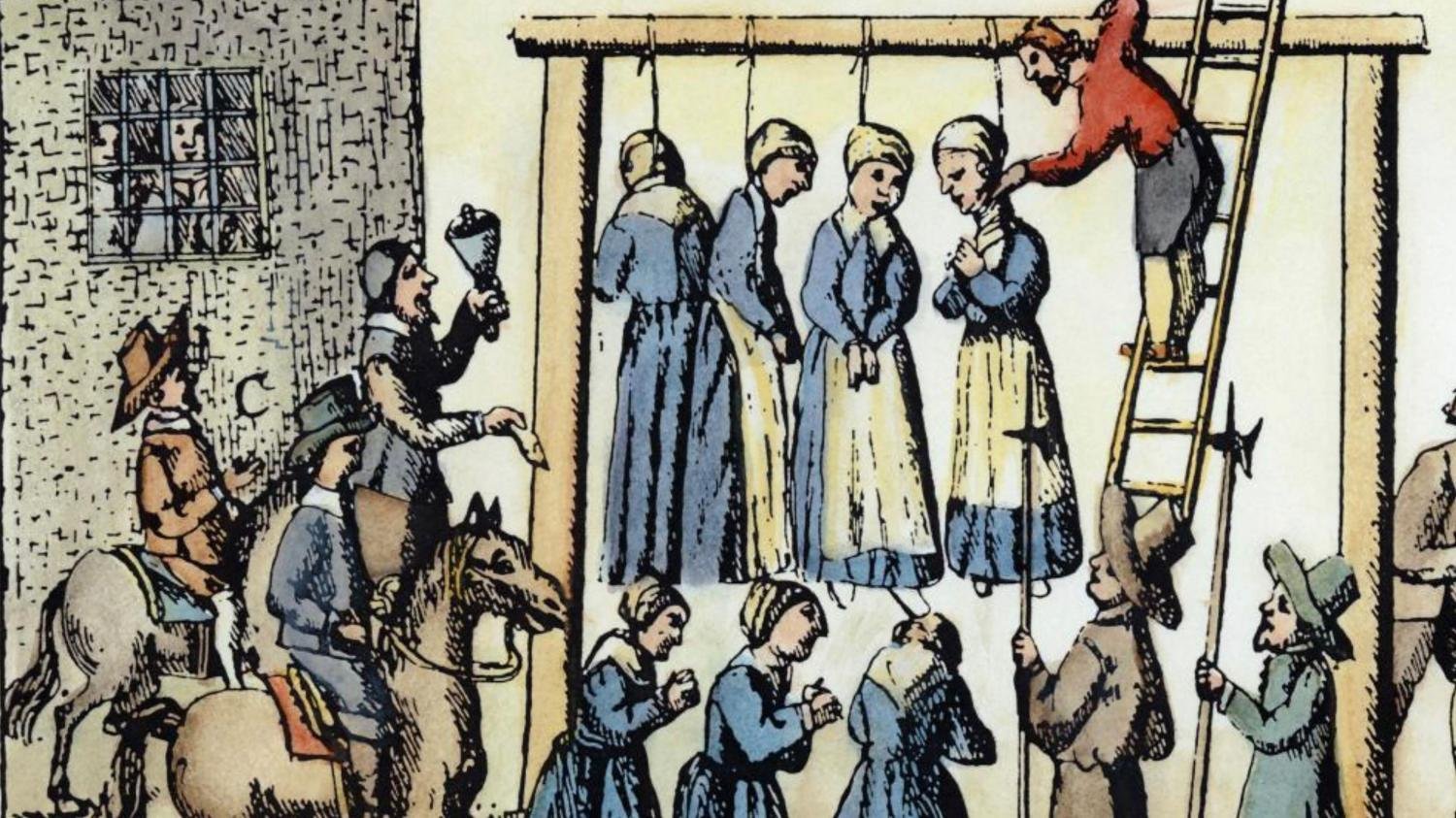 The public hanging of witches in Scotland. Coloured engraving, 1678.

1 Cup-of-tea magic is my thing. No full moon required.

2 Those who used their magic in a helpful way were called folk-healers or charmers, not witches.

3 This is an interactive map of Scottish witch hunt locations. There are so many.

4 In 1877 a book based on the parish records was written about the Renwick witches. It includes first-hand descriptions of trials, like this one for Christine Shaw -

This day Mr. Turner represented to the Presbytery a deplorable case of Christine Shaw… who, since the beginning of September last, hath been under a very sore and unnaturallike distemper, frequently seized with strange fits, sometimes blind, sometimes deaf and dumb, the several parts of her body sometimes violently extended, and other times as violently contracted…she hath degorged a considerable quantity of hair, folded up straw, unclean hay, wild-fowl-feathers, with divers kinds of bones of fowles and others, together with a number of coal cinders burning hot, candle grease, gravelstones, etcetera, all which she puts forth during the forementioned fits, and in the intervals of them is in perfect health.

5 Another ancient and magical part of Greenock is Crow Mount where witches met with their covens. It is said that a witch was hung there and that as she choked she forever cursed the ground beneath her dangling feet.