In my last post I said I would write more about the experience of becoming a Mataora and I am a truthful person so here I am doing it.

Mataora are critical and creative thinkers who use indigenous strategies to consider the world and work against racism. They do not have to be Māori. To become a Mataora I did the Mahi a Atua Rangi Parauri training. My work sent me to this and I am grateful.

At the core of the Rangi Parauri training is pūrākau, a traditional Māori storytelling and teaching method based on whakapapa and creation narratives. The simplest description of pūrākau is to say it’s metaphor; stories that parallel some aspect of life and in doing so provide the listener with a means of reflection and a catalyst for behaviour change.

But this does not adequately convey either pūrākau or my experience of it.

I truly do not think I can articulate the first with any kind of substance. There are English words like 'esoteric' and 'myth' that are kind of relevant but also not really. I can say that pūrākau are the domain of tohunga, that the Mahi a Atua tohunga is Mark Kopua (Te Aitanga a Hauiti, Ngāti Ira, Ngāti Porou) and that he speaks with authority, humility, beauty and power. This feels like it really.

(It would be remiss to imply that Mark Kopua works alone. The Mahi a Atua team includes many dedicated and impressive members).

I'll move onto the second thing, a description of my listening experience (this is mine only so impossible to get wrong). For me Mark Kopua's pūrākau made worlds as well as described them. Each one was like an opening where the realities of this dimension and that of the story spilt over and combined to make a new place. And I was right there. And there were beings, events, tools, ideas and feelings to grasp and bring back to my regular timeline. And because I did I am now a slightly different Indira.

The above is not strictly metaphorical. I’ve had a few multiverse adventures in my time and Rangi Parauri precipitated another. So to talk further about the training, rather than list all the things we did and use the word ‘amazing’ a lot, I’m going to share what happened. It illustrates the impact of specific pūrākau as well as the Mahi a Atua environment generally (well, one aspect of the impact. I had an equally hardcore intellectual reaction. This is manifesting in my workplace and stuff like this post).

I want to make it clear this isn't a general woah-I’m-seeing-spirits revelation story but rather the description of a particular occurrence. I’ve seen things since I was a small child and at this point in my life I consider it pretty unremarkable. This is not to say individual encounters are not overwhelming. They usually are and leave me exhausted and raw.1 But having them is like having arms. They're just part of me.

My visions2 are real on their own terms and I cannot be bothered arguing it. So you can know better, roll your eyes and point out accentuating circumstances all you want. I do not care in this universe or any other.

I see these scales in the sky all the time, faint behind the clouds. I don't know
what kind of creature they belong to, something that's too massive to see in its entirety. It's benevolent though and when I remember to look up I see the scales and smile.

Here is the story.

On the first day of the Rangi Parouri training Tina Ngata talked to us about the Doctrine of Discovery. This was not pūrākau in the traditional sense but listening felt similar; an articulate expert using words to share knowledge and facilitate time-travelling, sensory awareness, new learning and the making of connections between then and there and now and here.

Based on some Papal decrees issued in the 13th and 14th centuries, the Doctrine of Discovery provided the justification (spiritual, political, legal) for colonization and the seizure of land not inhabited by Christians. If you want more detail, research it. The point I want to make here is that the word ‘seizure’ in no way describes the century-spanning, horrific, gleeful mass slaughter of indigenous peoples that the Doctrine allowed.

Bartolome’ De Las Casas provides an eyewitness account of the conquering of the Indies by the Spanish in the 1500s,

“They forced their way into native settlements, slaughtering everyone they found there…Some they chose to keep alive and simply cut their wrists, leaving their hands dangling…” (De Las Casas, 1992, p. 15)

Here's another, this time from Reverend Threlkeld in 1825. Regarding the colonisation of Australia by the British he wrote,

“I was tormented by the shrieks of girls, about 8 or 9 years of age, taken by force by the vile men of Newcastle. One man came to see me with his head broken by the butt-end of a musket because he would not give up his wife.” (Broom 2002, p. 45)

There is way more and way worse stuff than this and hearing it churned my stomach, hurt my heart and blew my mind. But this was a completely appropriate response. The Doctrine of Discovery is a brutal and confronting truth.

After the session I decided to go for a despair and anxiety-settling walk. Ha.

I stepped out of my door and into blood. It was gloopy and quite a bright and definite red. It eddied across the ground. It was everywhere.

(Description-wise I will never get what happened right. But what a pointless post this would be if I didn't say something! I had to choose between a large and elaborate or small and plain approach. I went for the later. Like I said, neither option satisfies but this one's less effort and cringe. It's the same in the next section).

My first reaction was quite a prosaic, “oh dear, here we go”. I scrunched my eyes shut, breathed deep, flicked the rubber band on my wrist, did all the usual things that keep me grounded and decided to persist with the walk, thinking the blood would dissipate soon enough.

But it was horribly persistent. It stayed stuck to the footpath and to my shoes, beading up over the toes. The further I walked the twitchier I got and eventually I was just panic and tears.

The blood would not leave so I had to. I walked home, upset but also steely. I got there and my carpet was clean. I cried, shook, threw up a little (all usual) and then I had a cup of tea. 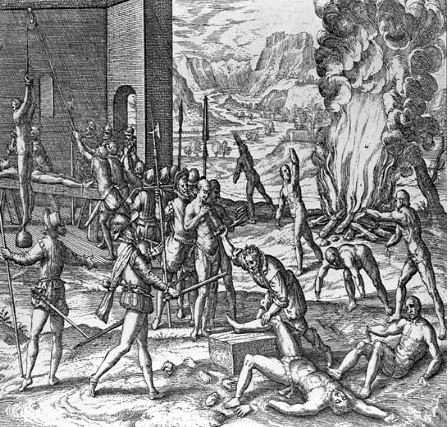 On the second day of the wānanga Mark Kupua told us about the Early Battles. This pūrākau is about the conflict occurring between the atua as a result of Ranginui and Papatūānuku’s separation. In this Tangaroa and his calm power play a significant role. He concentrates, weighs up, considers perspectives, and supports his siblings do the same. Tangaroa is the atua of the oceans, seas and all the creatures who dwell within.

I have a relationship with sea monsters. I know they exist and that they swim between dimensions. When they are seen but no proof can be found (like the Loch Ness Monster) it’s because they’re only stopping by. They don’t live ‘here’ or anywhere in particular but rather wander about the universes as they please (duh).

The plesiosaur ancestor-type monsters are my main jam. Once when I needed it, one of them came to look after me. It was giant, silent, transparent, serious, benevolent but staunch and not at all cute. It swam next to me, nudged me and helped me escape from a place in which I was trapped.

It acted like Tangaroa and made me think about how, why and when I could act like Tangaroa too; how I might better consider and support the perspectives and actions of others and not stomp over them with mine. 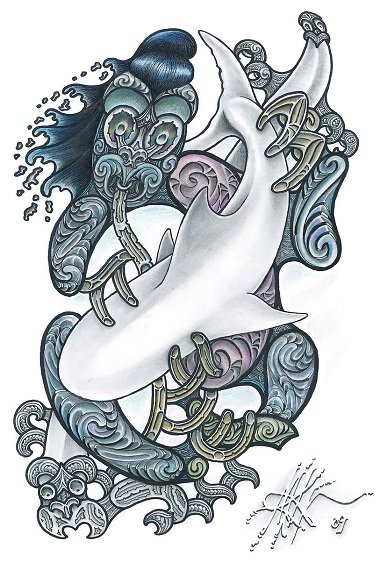 Tangaroa by Mark Kopua (learn more about this atua here)
Original image is the property of Mahi a Atua.

The pūrākau surfaced this connection (outside of myself I cannot say anything about the relationship between Tangaroa and plesiosaurs. I assume there's one but it’s likely beyond my puny human comprehension. Plus it's none of my business).

It made complete sense then that when I went for that afternoon's walk, I stepped out of my door and into saltwater. I  went “ah yes. of course” and smiled wanly.

The water was stirred up and swirly with those little foamy ocean bubbles (although no actual waves). It was shallow, sloshy, much thinner and easier to get through than the blood and I figured I’d continue.

Yeh nah. The liquid was different but the relentlessness and alarm were exactly the same. I only got a few metres before I was overwhelmed and had to retreat home where it was dry and safe to cry, shiver and puke. Home is also where the kettle is (I do not know the name of the tea deity but they are mighty). 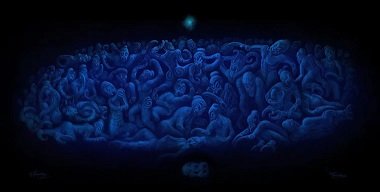 And that's the story.

I can hardly ever draw a direct cause and effect between my life and my visions but this time it was flagrant. I'd listened to Tina Ngata and Mark Kopua and the pūrākau portals did their thing. Maybe they were open longer than usual or I was slower to leave or the unleashed universes were simply persistent. Either way they hung about and I stayed in them.

I know where the blood and saltwater came from but I am still figuring out why. There are some general lessons about the power of te ao and Mātauranga Māori, indigenous frameworks and knowledge systems, opening yourself up, stories and storytellers but at a personal level I am not yet sure. There's no hurry to fully suss it out (maybe I never will).

One final note - if after reading this you are worried about me, please don't be. At no time did I feel in danger (from myself or elsewhere). I've talked things over with relevant people from relevant contexts (including members of the Mahi a Atua team who were knowledgeable, caring and accessible). Everyone knows I'm ok. I know it too.

(But please get in touch if you need any primary source reassurance).

1 I did recently see a flamboyant pirate cross the road in central Wellington. This vision was super brief and funny.

2 I don't like this word at all. It implies an epic kind of religious ecstasy that couldn't be further from the truth. I can't think of another one though.