Eccles in a toga

I find it difficult to comprehend that in the world there are people who have not heard of the Goons or have heard of them and go meh. My neomammalian brain knows that these realities are completely fine and sensible but it freaks my reptilian brain out. It thinks the Goons are basic life-survival-shit.

Also when I do meet a non-Goon-knowing type (like I said, totally fine. Breathe) I find it hard to explain to them just exactly what the Goons are and why they are so amazing. There are lots of adjectives bandied about by people who do try and describe them like ‘anarchic’ ‘surreal’ ‘genius’ ‘crazy’ ‘seminal’ ‘landmark’ but while these words are right they do not to me feel true. For me the truth of the Goons – as it is with all the things I find incredible – is in my head and heart response and that is all I can really say about it.

A factual explanation of what they did and when is much more manageable but I don’t need to give it. Wikipedia has a perfectly good one. The only thing you really need to know to understand this post is that they were a radio act on the BBC from 1951 to 1960 (although it is quite cool to also know that the Goons named themselves after Alice the Goon from the Popeye comics).

Anyway on to the main event which is a book called The Goon Cartoons.* It’s by Spike Milligan** and Pete Clarke*** and turns four radio scripts into comics: The Affair of the Lone Banana, The Scarlet Capsule, The Pevensey Bay Disaster and The Last Goon Show of All (follow this link. You won’t regret it). All feature the regular radio Goon characters - Neddie Seagoon, Eccles, Bluebottle, Major Bloodnok, Henry Crun, Minnie Bannister, Grytpype-Thynne and Moriarty (yes they are the best names ever).

A brief synopsis of the content, just so you get the vibe**** -

The Affair of the Lone Banana tells the tale of the dwindling empire from the perspective of Great Britain’s last surviving banana tree. The Scarlet Capsule is science fiction and features special guest-star character Neddie Quartermess, “…son of a scientist, daughter of darkness – two for the price of one!” The Pevensey Bay Disaster concerns a snow plough clearing a railway line and the dastardly Grytpype-Thynne and Moriarty planning a train robbery.

The Last Goon Show of All (I repeat. Follow this link. You won’t regret it) is a little different. It comes from 1972, twelve years after the last series of the Goon Show proper and was part of BBC Radio’s 50th anniversary (and it was filmed. Did I mention you should follow the link?)

The Goon Cartoons is faithful to the radio show in being pretty much incomprehensible. The language is mad and the drawing is crackers. But while the language is mad in a big loud traditional Goon Show kind of way, the drawing is its own different kind of crackers. The panels in the comics have no backgrounds and the characters tend to be squashed up in the corners with their words taking centre-stage. It is all a bit odd until you realise Pete Clark is conveying a RADIO PLAY AS VISUAL IMAGES.

For me the comics do this perfectly. You all know I love a comic that knows it’s a comic but it turns out I also love a comic that knows it’s a radio play. The Goon Cartoons is an in-your-face self-aware constructed double-media universe and I find the whole thing fantastic. Sigh. And the characters somehow match their voices and are all suitably confusing and random. I’ve no idea why Eccles is wearing a toga but it could not be more perfect.

There is one last thing I need to say and a little bit of back-peddling I need to do. Sometime not that long ago I whinged on about how stink comic adaptations are and that I didn’t know any good ones. But this is a good one, mainly because it weirdly and brilliantly references the stories’ original form not just its content. The RADIO PLAY form. Comic adaptations of novels or movies (i.e. not RADIO PLAYS) don't do this. They're all about the narrative and the comics-as-a-medium-for-telling-complex-stories and-engaging-reluctant-readers-blah-blah-blah-yawn. And just thinking about those kinds of comics has made me too tired to write any more.

*There is a More Goon Cartoons but everything I say here about the first book applies.

***Pete Clarke was a pretty famous cartoonist for The Guardian

****I’m not gonna lie, being from the 1950s and written by a War Veteran (Milligan) there is some stuff that's not ok. I won’t defend it but simply say it does not cross any of my boundaries. 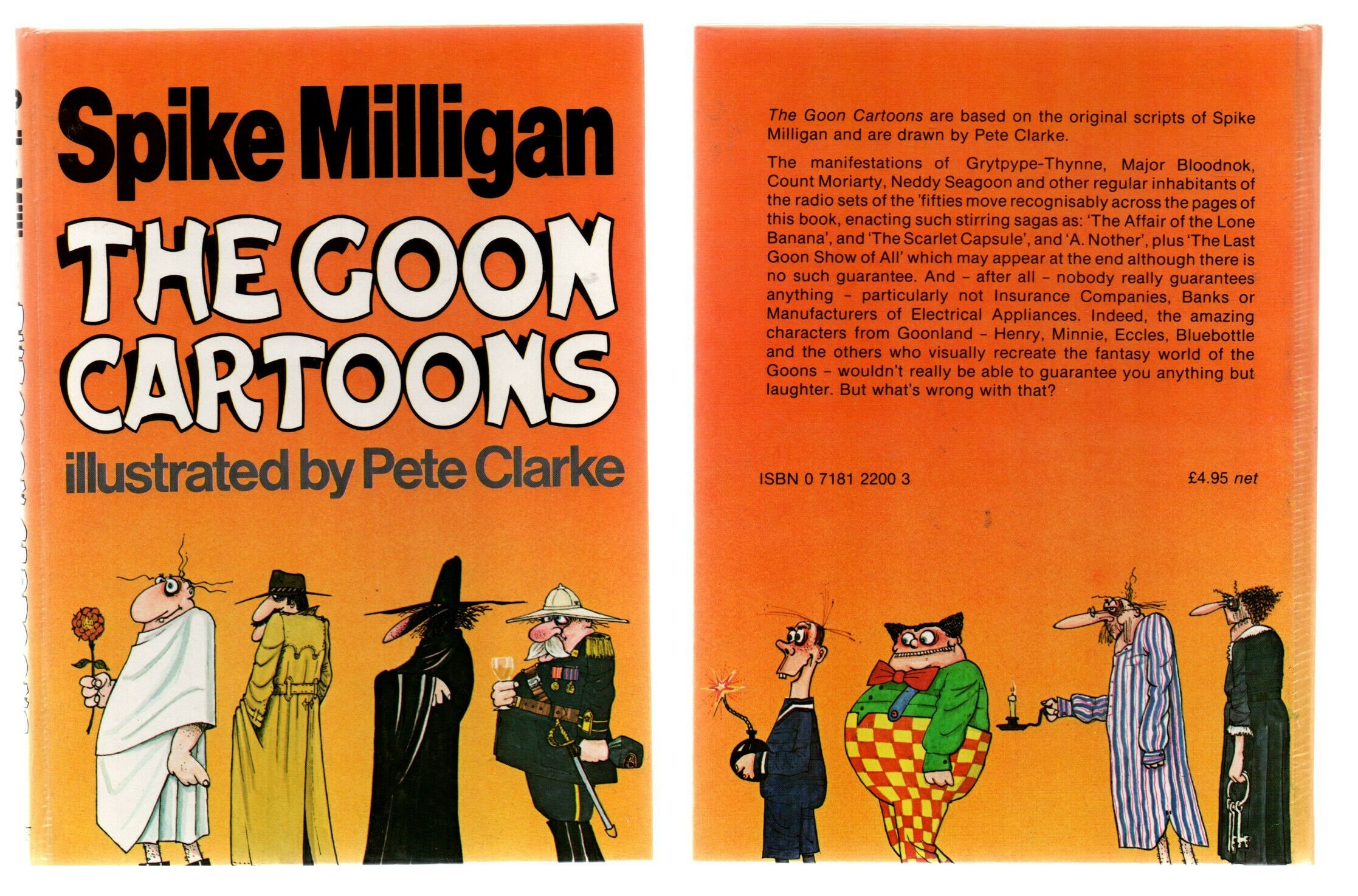