If you’ve been reading my comics for any period of time (thank you) you’ve probably noticed that quite often I also appear in them. Well, a much braver, tougher, funnier, wittier, more physically elastic and fashion-conscious version of me. Kind of an uber-me. That’s us down below (it’s going to get ridiculously confusing if flesh-me and cartoon-me are both ‘me’ so flesh-me is going to call cartoon-me ‘her’ or ‘she’. Yes yes it’s all very meta). This post is about cartoon-me. It’s not particularly well-constructed or useful or policy analyst, more just a meandering journey through things I’ve noticed.

There are some people who think every girl in every comic I’ve ever made is essentially ‘me’ regardless of how they look. This is not true. Although cartoon-me shares many qualities with these other girls – confidence, silliness, magical bodies, really skinny necks and the ability to deliver a punchline – she is not the same. Cartoon-me only ever appears in comics that have some relationship with my experiences in the real world such as being unwell, being part of the NZ comics scene, being a mother, owning teacups etc. She never appears in those comics that are total fantasy. Also, unlike the other girls (you’re not like those other girls) she hardly ever talks to or interacts with anyone in the comic world. Instead she pretty much just blathers to the reader.* Yes, meta again yada yada.

Cartoon-me tells her audience about her experiences and thoughts, remembering that all of these do have some basis in flesh-Indira’s life. So she is sharing my thoughts and experiences but in much tidier punchier context-specific way than they occur in real life. It’s kind of a contradiction. Cartoon-me is more outrageous and random than flesh-me, yet she lives in a more carefully constructed and (punch-line) predictable world. And she crushes it! In this world she is the supreme being. As well as a processing and reflection tool, she is also therefore a way to feel more powerful, especially about complicated real-world things I cannot control or find upsetting. She is flesh-me aspirational.

In the very early days of making comics, cartoon-me was absent. Instead I had these characters ‘Girl Gravy’ and ‘Thumper’. These two were the mainstays of my self-published young-flesh-me comic ‘Nice Gravy’. Girl Gravy was actually insane - rude, physically violent, kink-laden, impervious to pain and utterly shameless (so dodgy was she that Mark I Comics used to seal up issues of Nice Gravy and put them on the R18 shelf next to the porn. Truly one of my greatest achievements as a cartoonist). Thumper was much quieter, the smaller sensible foil. Dean Martin to Girl Gravy’s Jerry Lewis. Most of the issues of Nice Gravy were made before I was diagnosed with bipolar disorder and sometimes I wonder if these comics were unknowingly about this; If Girl Gravy was me when I was unwell - crackers and oblivious and prone to extreme emotional highs and lows; and Thumper was me when I was well - a respectable school teacher and (a bit more) in charge of my life. Then I wonder if cartoon-me, who came after my diagnosis, is a self-aware more integrated Indira, still crackers but not AS crackers and still sensible but not AS sensible. But fuck, who knows? Probably Freud would say he does but I don’t trust that guy one bit.

Cartoon-me is a much snazzier dresser than flesh-me. Her outfits are one of the things readers often comment on (possibly they are jealous). She confidently wears lots of patterns, endorphin dressing way before it was popular. And t-shirts that - if not garishly decorated - reference way cooler things (e.g. Oats) than your average hipster.

Her hair and glasses are never different even though mine are. This is partly because she knows what she likes and partly because I want my audience to know they are reading a comic when they are reading a comic. She is a cartoon therefore she does not age or alter the way flesh-Indira does. Somewhat paradoxically however, she does change with every panel. Cartoon-me is always recognisable but her hair may be indiscriminately a little larger, her skirt a little shorter or a new-non-human limb may have suddenly sprouted. This is again because it is important to me that the reader never forget that they are reading; that cartoon-me is drawn and at the mercy of flesh-me.

In the above scenario I am in charge but often she is. Cartoon-Indira is an ally but sometimes she is a pain in the arse, or more correctly, the brain. It often feels like she writes the comics instead of flesh-me and when she thinks she’s authored something good she starts relentlessly clamouring to be let out of my head. I always obey her although I postpone it for as long as possible, usually because I have other stuff to do. I know that once I give in to her and begin to make a new comic, both she and I will be completely consumed until it’s done. I know it’s done because she goes quiet (until the next time).

Cartoon-Indira’s power is perhaps best illustrated by the fact that when I meet new people who are familiar with my comics, they often go “oh, you are just like her!” Not “oh, she is just like you!” Sometimes she is the original and I am the copy.

And that is pretty much cartoon-me. She is flesh-me but also not.

*There is a tradition of comic-makers including themselves in their comics – Sarah Laing, Roberta Gregory, Julie Doucet, Aline Kominsky-Crumb and her husband –  but they do not generally break the third wall. Sam Orchard is really the only other cartoonist I know who does this with any regularity. 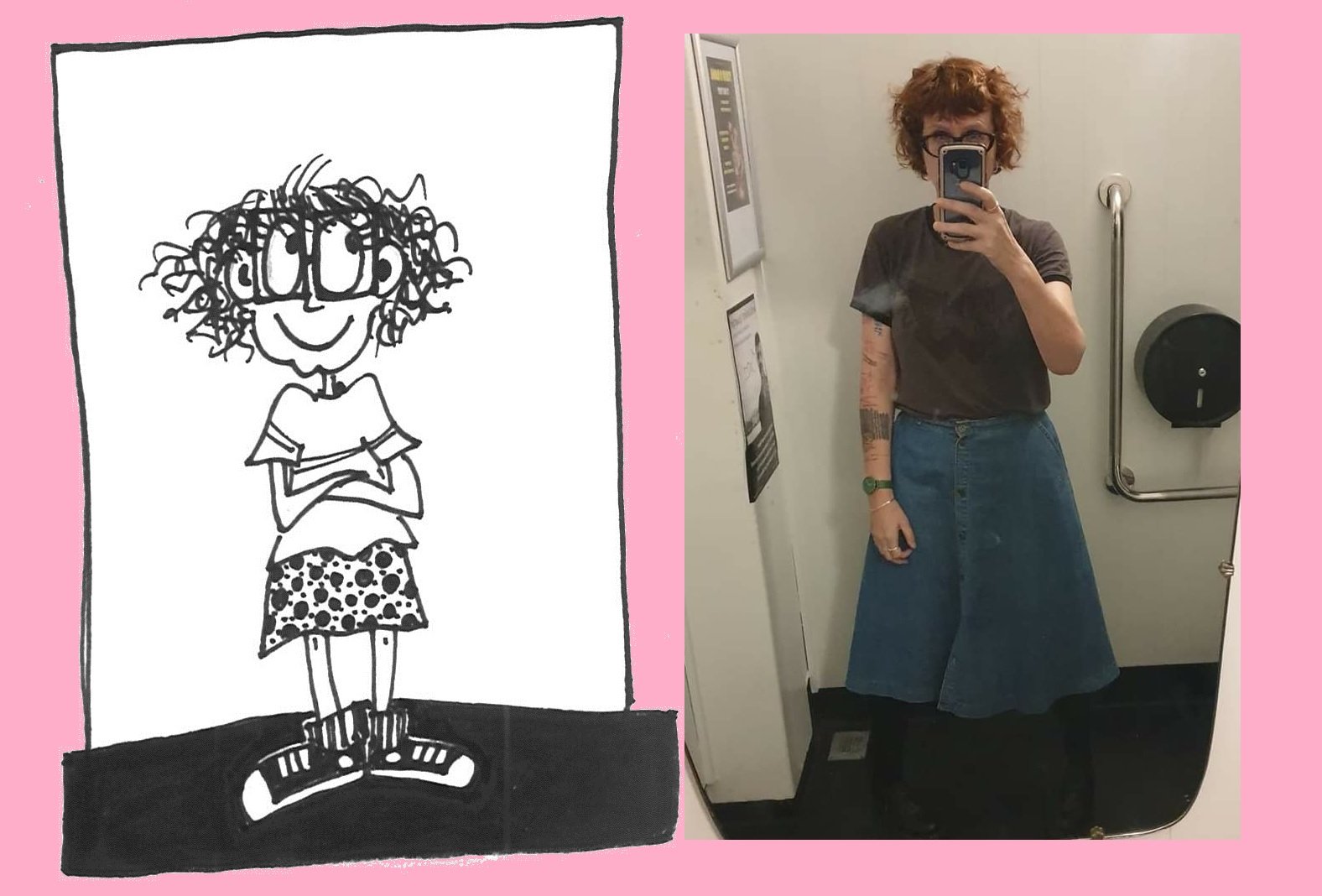