Incompetence by any other name would still smell as sweet

As I explain in another post I happily call my comics ‘incompetent’. Read this other post if you want the full Indira incompetence experience. Here I’m just going to repeat what I mean when I use it to describe my work,

“My drawings are incompetent but they are deliberate…they are the result of thinking and making choices…I purposefully for example, make my panels minimal and flat and relentlessly similar without show-off backgrounds or razzmatazz movie angles. I am also resolute in the drawn necks that are too skinny for the heads they hold; the characters that don’t look quite the same each time they appear; how my home-made glued-on screentone is out-of-sync with the shape it’s meant to fill; and making the drawing secondary to the punchline always. Unlike the ability to draw things-that-look-like-things I am not sure if my particular type of incompetence is something anyone could master. Maybe it is. I have this feeling though, that while anyone can become a photorealist, incompetence is individual. ‘incompetence’ is yours alone”.

So that is my definition. But I am not the only person who prioritizes singularity and fancy-technique avoidance. There are lots of us (including you probably) who think that prettiness or pleasantness or things-that-look-like-things do not make for captivating art (comics and other kinds). Of course we don’t all value the same things but some common ones are energy, the presence of the artist, fearlessness, relentlessness, resolve, vulnerability, rebelliousness, transgression, protest, self-awareness and acknowledgement of form as well as content.*

It is amusing when you meet someone who does not value or ‘get’ these things and struggles to understand why anyone else would. More than once, for example, a kindly soul has patiently explained to me that if I used a computer I could get my frames straight and my screen-tone to fit exactly (then I could fix the image below!)

But anyway! Incompetence is a glorious cross-medium tradition and by any other name still smells as sweet. Here are some (and only some) of its other names:

Sloppy Craft: Sloppy craft refers to a practice and theory that emphasises effect and message over construction. As the name suggests it is used mostly in the area of craft, for example quilt and furniture-making; mediums with a strong tradition regarding the fine ‘mastery’ of technique, like the ability to make even and invisible stitching or dovetail joints. In contrast, Sloppy craft is purposefully messy or unfinished in its execution, appearance or both and as such is often not well received. Textile artist June Underwood gives an example,

”My attention was entirely on the image and impact. The craft was there only to hold it together and/or to add to the art. Hence my seams were not necessarily straight and the back was decent but not flawless. I used the quilting stitches as part of the design, which meant that they were generally not even in length and that they were heavy in places and light in others. The quilted art hung wonkily and offended everyone”.

Bad taste: John Waters uses Bad taste as a catch-all description for his films. These are by degrees sordid, silly, cringey, abject, rebellious, roughly made; just generally an affront to all the senses.

He believes in those of us who love this stuff,

“To understand bad taste one must have very good taste. Good bad taste can be creatively nauseating but must, at the same time, appeal to the especially twisted sense of humour, which is anything but universal”.

Testing what art is: My friend Bek is a multidisciplinary artist who “likes to test what art is, enduring the shitfight” in order to do so. She describes art as “a call to the wild” and pulls from the earth and universe whatever medium or message or image is necessary. And you just KNOW that into-battle work that comes from the soil and magma and stars is wild and powerful and singular as fuck (in origin, process and end result).

Her work is also political, propounding an anti-capitalist mythic female utopia and for this she is sometimes described as idealistic. But Bek says,

“Why the fark is it even idealist? This shit is normal where I come from”.

Heta-uma (bad-good / unskilled-skilled): Heta-uma generally refers to any manga that looks poorly drawn but with an aesthetically conscious quality. It is a post-hippy, pre-punk term coined by artist Yumura Teruhiko alias King Terry. He originally used it to describe his own comics - raw, apparently craftless, off-register, random and a rejection of mainstream polish. Of his work's origin he says,

“I wanted to draw the pictures I wanted in the space provided rather than tell a story”.

Yumura Teruhiko dioesn't try or want to develop his technique, believing the ‘soul’ is subsumed in manga that is too perfect.

Scumbag: This is the word my friend Mike uses to describe the films he makes,

“My work involves an ongoing exploration of consumer culture, realized through the use of mass-produced plastic toys and kitset models…My animation is a simulacra, the materials revealing processes of construction”.

While some of the (Wellington) art world appreciate his scumbag attitude, his movie career prospects are not great.

Do what you’re not supposed to do and see what happens: This is David Shrigley’s stated approach to art. He is a conscious rebel, does not care about being generally palatable, relishes his lack of technical skill and enjoys ugliness,

“I just like the fact that you draw this beautiful naked young woman and she looks really ugly in my drawing with a really big head and small hands”.

He is also interested in the way his work is valued or not,

“…the funny thing is that I’m a famous artist, because people who don’t know anything about art say, “how can you be a famous artist if you can’t draw?”

Punk: Contrary to what some may think, punk is not about having a two-foot-high orange mohawk, tattoos or a love for the Sex Pistols (although it doesn’t exclude these things). Punk is about liking what you like, being yourself and not giving a whole lot of fucks about other's opinions of you. It is about having both an open mind and boundaries; listening to others but saying what you think; and calling people out on their racism, sexism, anti-vax stupidity etc. It's also about community, supporting others their own punkness.

Punk has a strong comics tradition but is an ethos that transcends all forms of expression and art.

Dismantling correctness: In 2013 the Comics Journal ran a feature called ’20 Questions with Cartoonists’. It asked (duh) a bunch of different comic-makers – some working in established genres, some “iconoclastic and art” -  the same 20 questions, the goal being to “dismantle attitudes about how to make 'correct' comic art” via a multitude of perspectives. Some (unsurprisingly) were fans of ‘incompetence'’,

Alabaster Pizzo - “Art doesn’t have to imitate the real world; I have no problem letting a drawing be flat and representative rather than realistic”.

August Lipp - “I like work that feels like it was necessary to the artist who made it. Art from the heart! Honest, funny, and a little bit crazy. Something I admire…is how even when there isn't an explicit joke being told, the scenario, details, and gestures can be so outlandish that a sense of giddy euphoria permeates”.

Alex Graham – “The art form that is most attractive to me is my own art form… I spend a lot of time alone with my art and I like my imaginary friends more than most people”.

Andrea Lukic - “I've learned to love that the comics which have no texture or variance of saturation are quite boring to me on purpose. The flatness of the graphic design and repeating colour palette seem to be aesthetic devices to portray vast droning banality. I'm ok with that”.

I know there are more sweet-smelling  ‘incompetent’ roses in the art garden - gARTen - but I reckon this is enough.

*Please note that I am not including in this post the beautiful work of diverse artists such as those at Mapura Studios; nor non-Western artforms and practices; nor the ethnocentric ‘primitivism’ of the early 20th Century. While these all share some ‘incompetence’ attributes I believe their contexts and motivations make them essentially different. Hence to include them here would be incorrect, disrespectful and reductive.
I am also focusing on representative works rather than abstract. This is because ‘good’ works are often measured by their closeness to real life, how much things-look-like-things. For me one of the defining things about ‘incompetent’ art is that this is not really important. 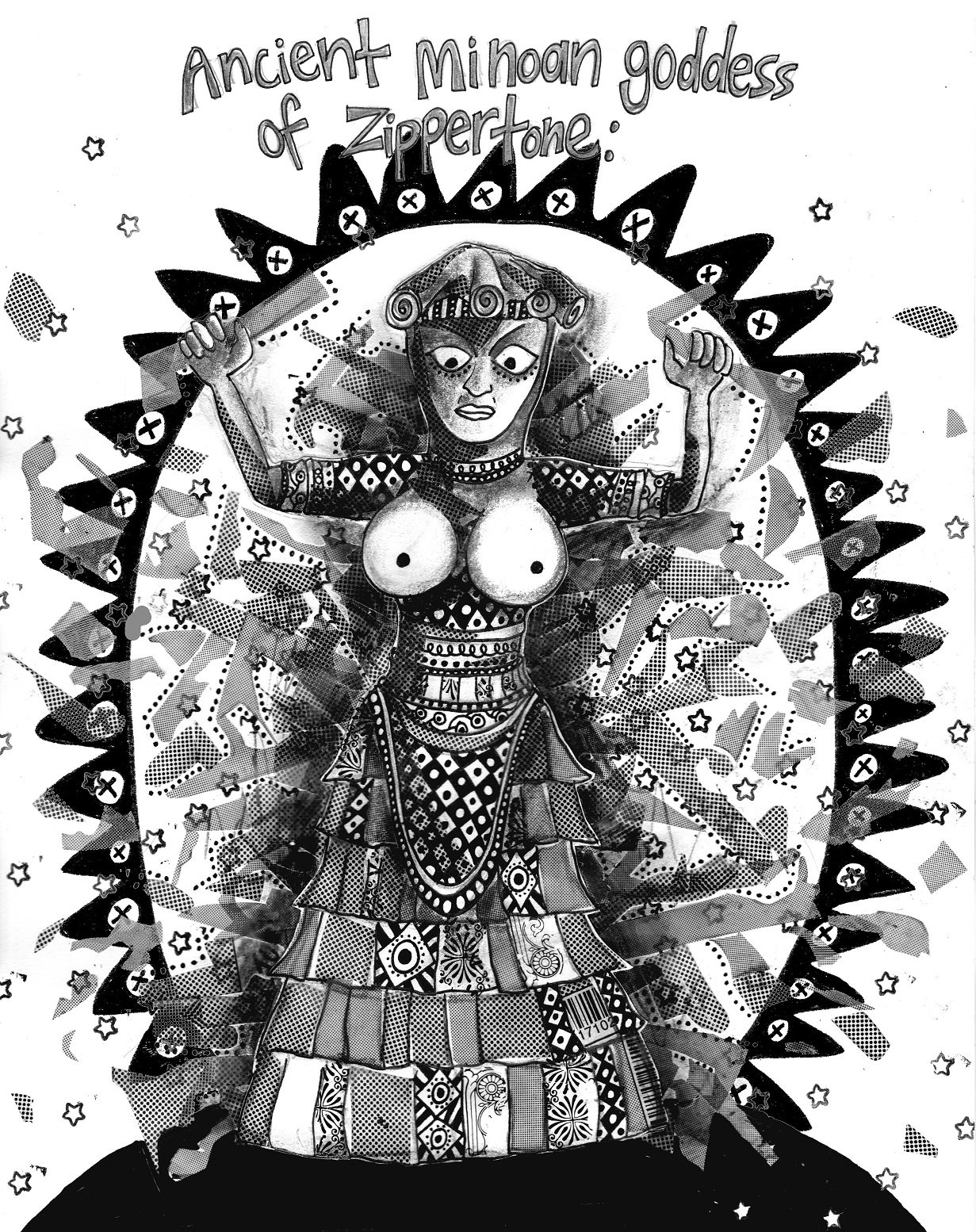