My daughter loves Kewpie mayonnaise and I love Rose O’Neill, the cartoonist who invented kewpies but didn’t invent mayonnaise. There have been many times I’ve looked at the plastic wrapping (below) and pondered as to why the kewpie was there, but then been distracted by the colour of the tin opener or by wondering if, when someone says “twenty eels ate a mandarin” it means all the eels shared one mandarin or if it means each eel ate a mandarin or if it means both.

But now I have this blog and a correspondingly desperate need for blog fodder (comics is such a daft and tiny niche. I really didn’t think things through) and a kewpie mayonnaise saga seems unavoidable and perfect. So, right here right now -

Rose O’Neill and the kewpies

Rose O’Neill was a remarkable woman and a remarkable artist of all kinds – painter, novelist, poet and cartoonist. In this post I’m not really going to talk about her outside of a kewpie context but I’ll stick in some links at the end. She is famous but if you don’t know about her it is worth knowing about her.

In 1914 Rose O’Neill was the highest paid woman illustrator in the US. One reason for this was that she invented the kewpies. You have likely seen a kewpie, if not on a mayonnaise bottle then in one of a hundred other places. They are kind of a small mystical baby/imp/demon hybrid with a round tummy, penetrating side-eye, dots for eyebrows, golden mohawks, burning cheeks and tiny blue wings protruding from the neck. ‘Kewpie’ was a bastardised version of ‘Cupid’ and of their creation Rose O’Neill said “they are a sort of little round fairy whose one idea is to teach people to be merry and kind at the same time…to do good deeds in a funny way. The world needs to laugh or at least smile more than it does”. (This is all good with me. I think the ability to make someone laugh is one of the most important things in the universe).

Like all successful powerful, benevolent mythical creatures, the kewpies first manifested in a dream, “I just dreamed them, I was in bed. Suddenly they were bouncing about over the cover, chirping. One perched in my hand like a bird. It wasn’t warm like a human baby. It was oddly cool. So I knew they were elves”.

Rose O’Neill facilitated the kewpies’ move from the spiritual realm to the physical via comics (we’ve all been there) the first of which appeared in 1909 in the Ladies Home Journal. Kewpies immediately went viral. The public were crackers for them and soon they transgressed their comic strip borders and appeared in all kinds of other places and forms,* most famously dolls.

Kewpies made Rose O’Neill heaps of money, but they also gave her a powerful tool for promoting the feminist cause. Rose O’Neill was hardcore. She navigated her way through the male-dominated magazine industry without losing herself. She married twice and was twice divorced. She made other women her business partners. She flouted the restrictive female clothing of the day, and she made a deliberate decision not to have children. She was also a committed campaigner for women’s suffrage and her kewpies were too.

The popularity and – legitimately valuable in and of itself (see above) – cuteness and joy of the kewpies allowed entry into lots of places that were inaccessible to ‘harder’ feminist cartoons. These places were literal, like publications and products, and metaphorical like the hearts and minds of the ‘traditionally domestic’ women who engaged with the works. In fact many of Rose O’Neill’s suffrage comics were designed specifically to appeal to mothers, like this one - 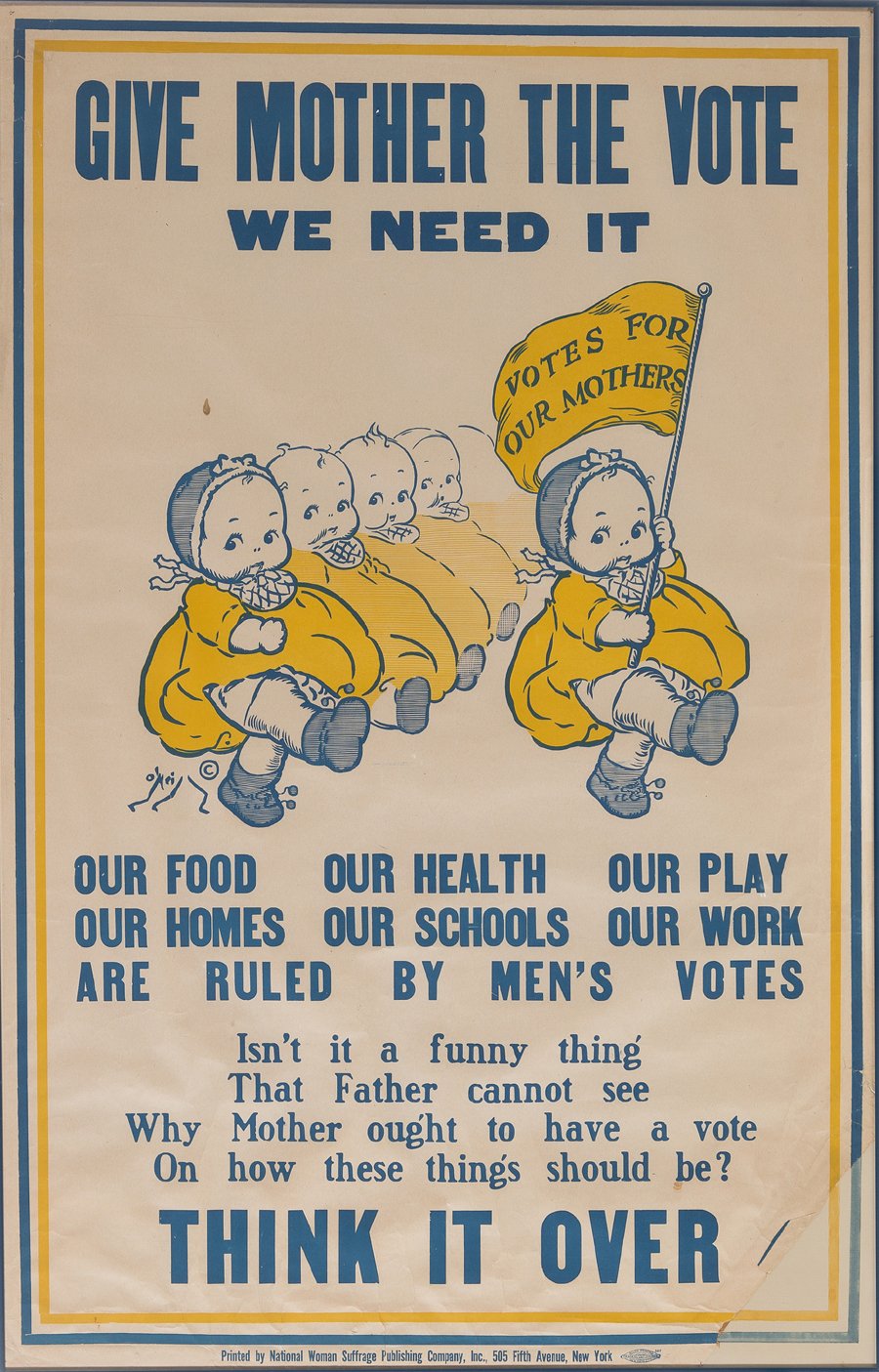 Do a search for 'kewpies suffrage' and you'll find shitloads of others.

Toichiro Nakashima and the mayonnaise

In 1919 Toichiro Nakashima founded Nakajima Enterprises (now called the Q.P Corporation). The company specialised in making Western foods unknown (previously) in Japan like canned salmon, marmalade and – the star of this story - mayonnaise. Nakajima Enterprises invented and launched the kewpie mayonnaise brand in 1924 with (ta da!) an image of a kewpie on the packaging. 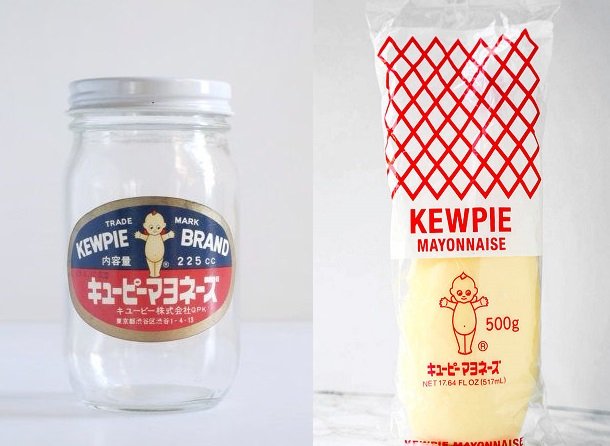 On one of his food-sussing trips to the US Toichiro Nakashima had discovered the character, decided it was ace and used it. For the first two years he did so illegally, acquiring the Japanese licence in 1926 (it’s still current). Nakashima was drawn to the kewpie, not for its suffrage agenda but for its other defining feature, cuteness.

Japan has a dedicated culture of cuteness called ‘kawaii‘. As an entry-level blogging pakeha it is not appropriate for me to attempt to give a treatise on ‘kawaii’. It is an ancient, multi-faceted and evolving concept and you can search yourself for an explanation by someone more credible. I am going to stick to a superficial and individualised approach.

In English the word ‘cute’ means things like lovable and sweet but the ‘kawaii’ concept is more complex. As I understand it, kawaii does incorporate the chubby-cheeked Western perspective but entangled with this are notions of awkwardness and pity. So its overall meaning transpires as something like slightly-uncomfortable-delight or slightly-embarrassing-adorableness.

This is exactly how ‘cute’ Japanese characters make me feel and I guess ‘kawaii’ means it is intentional. I find the disproportionately large heads of Doraemon and Hello Kitty endearing but I also worry about the damage the weight might be causing to their shoulder muscles and what their brains look like inside - are they massive and squeezed tight to fit, or are they tiny and sloshing around? Neither appeals to my Western bias.**

Kewpies make me feel the same way albeit they are not designed to do so. Earlier I described them as a baby/imp/demon hybrid and I think this is ostensibly kawaii. Kewpies have lovely pudgy knees AND a psychoanalytically-alarming absence of genitals, pinchable rosy cheeks AND a spikey street thug hair-do. Kewpies simultaneously beckon and repel.

Kawaii-style mascots and logos can be found all over Japan. Multinational corporations, street markets, and national and local government entities have them. So culturally, aesthetically and economically it makes perfect sense for a Japanese mayonnaise to have a kewpie on the front of its pack.***

The mayonnaise is instantly recognisable and like the character it touts, insanely popular. The brand name ‘Kewpie’ has become a generic term for mayonnaise+ and the Q.P Corporation (formerly Nakajima Enterprises) makes around $5 billion US per year, “driven by growth in overseas sales of condiments and mayonnaise”. There is even a Kewpie mayonnaise museum.

Anyway, I have spent all Saturday writing this and I was happy and engaged the whole time. The world is interesting. It’s a trip.

*Kewpies are one of the earliest examples of licensed merchandising based on a drawn character. They pre-date Mickey Mouse by 20 years.

**I am particularly uncomfortable with and perplexed by the mainstream culture of ‘sexualised cuteness’. For example ‘sweet Lolita’ fashion or where children’s cartoon characters like Sailor Moon have rockin’ adult women bodies. But that is really another thing.

***The Kewpie has been used by other Japanese companies for promotion, for example the Kitagawa doll museum and toy shop, and the Industrial Bank of Japan. They have suffered lawsuits for doing so.

A short documentary about her suffrage work

Before she drew the kewpies she drew a comic called The Old Subscriber Calls for Truth magazine. It was the first published strip by a woman