I want to write about the difference between ‘Political cartoons’ and ‘political cartoons’. You may note that the only difference between these two terms is a capital ‘P’. Text-wise It’s not a very clear distinction nor will it make this post easy to read, so instead I’m going to use the only-very-slightly-visually-better ‘big-P’ and ‘little-p’ cartoon monikers. The ‘big’ and ‘little’ reflect only the size of the letter P not the value of either category. Yes it’s all a bit daft but so is everything to do with comics ever.

Possibly you are wondering exactly what the difference is between ‘big-P’ and ‘little-p’. I will tell you (I’d never leave you hanging) but before I do I want to acknowledge that these categories are annoyingly binary and in real life they overlap and entangle. I’m using them here for the sake of clarity and convenience, a way to organise my thoughts. I know they are not definitive or unarguable or anything like that.

So now the caveat has been made and I can continue. When I say big-P and little-p this is what I mean:

In big-P cartoons, ‘political’ is essentially a noun, a nicer-sounding stand-in for ‘politics’. Big-P cartoons are about politics. That is actual politicians and/or political parties and/or policies and/or current events. With little-p however ‘political’ is all adjective. It describes the idea that specific spheres of thought and activity have inherent, usually power-related qualities. Little-p comics aim to reveal and critique these. The distinction will get clearer as we truck along.

(Full disclosure - I’m more interested in little-p than big-P. This has nothing to do with the quality or importance of the cartoons and everything to do with personal experiences and interests. That’s why they won’t get equal airtime. In a gesture of goodwill however, I am going to put big-P first).

As stated, big-P cartoons have politics as their subject matter. They illustrate whatever’s going on but importantly they also comment on it, seeking to make visible political agendas and social consequences. Big-P cartoons can be funny or sad or furious or celebratory but are always pointed. Form-wise their power comes from things like exaggeration, parody and caricature. They often use headings or labels as well as/instead of speech bubbles.

Newspapers are mostly where they live because this medium reflects the day-to-day political ebb and flow. Newspaper contents - articles, editorials, photographs as well as cartoons – change alongside the topics they cover. Big-P cartoons are usually single panel and I suspect this is due to a combination of practical considerations – the need for fast turnaround, limited page space – and the desire for a single attention-grabbing POW POW moment.

This occupation is not for the faint-hearted. It requires wit, ruthlessness, speed, the ability to pinpoint exactly what's going on and to draw weird yet recognisable public figures. Big-P cartoonists also have to simultaneous give heaps of fucks and no fucks at all; to care about the things they’re commenting on, but to not care if people react to their commentary in unpleasant ways.

High profile members of this particular comics posse include Sharon Murdoch, Emma Cook, Rod Emmerson, Jeff Bell and Tom Scott (lists are always so risky. I know I’ve left people out and I’m sorry). These artists connect to a long strong big-P cartoon tradition in Aotearoa, much of which is chronicled and kept safe in the Alexander Turnbull Cartoons and Comics Archive.

With little-p, the word ‘political’ is a synonym for ‘ideological’ or ‘philosophical’ rather than a reference to current events or politicians. Little-p cartoons draw on meta-narratives and dominant paradigms and focus on the power structures within these. Theories about things like religion, gender, race, history and economics are common fodder. These comics are explicit and didactic, aiming to make their reader learn or understand a point of view not just be informed.

In Aotearoa little-p has a tradition and presence as strong as that of big-P but as a genre is generally less visible (presence and visibility are not the same thing. Presence is small but deep. Visibility is wide but shallow. No hierarchy or morality are attached to either). Little-p content is generally radical and the art not necessarily conventionally ‘good’. It is often produced, distributed and - sometimes despite concerted efforts - read all within the same community, one likely already committed to the position the comic is taking.

Broadsheet is an important little-p-toting publication with all these attributes. Broadsheet was an explicitly feminist magazine that ran from 1972 to 1997. It played a significant part in Aotearoa women's activism as a channel for information-sharing, protest and connection. It critiqued patriarchal and colonialist narratives via explorations of sexuality, Māori sovereignty, health, crime, politics, class, civil and reproductive rights and it used a variety of forms to do this – essays and articles, photographs, opinion pieces, poems and cartoons. Politicized women were both its creators and audience.

Despite the passing of time – literal and social attitude-wise - Broadsheet cartoons remain pretty niche. They are however an important part of Aotearoa’s history and need to be recognised as such outside of their original community. Any comics guru worth their shit needs to make the effort to do this and now there is no excuse because Auckland University has made all the issues available online.

For a long time Broadsheet (and lots of other stuff) was unacknowledged in mainstream Aotearoa cartoon and comics histories. Everyone knows I think this is because of the competent boy comics paradigm which was insidious, and unchallenged by the gurus. It was so visible it was invisible, ‘naturally’ (pfft) elevating its proponents above the great unwashed and unpublished. The whole crappy set-up was obvious to me and it pissed me off (you probably noticed) and so (amongst other agitation methods) I made An Incompetent Girl Comic. This contains a variety of little-p cartoons designed to reveal and ridicule the competent boy state-of-affairs. It uses both content and form to do this – featuring comics Indira haranguing dudes and doing so via techniques diametrically opposed to the competent boy aesthetic.

While it's true that patriarchy-slaying little-p cartoons are my favourite (to read and make) I do also enjoy challenges to other meta-narratives. Michael McClelland’s cartoon assault on capitalism is an example. Michael’s work reveals the inherent pain, inequality, hypocrisy and ridiculousness that is the right-wing economic swamp in which we all currently swim. His jokes are right on and he draws in a beautiful scumbag style, one that’s a ‘fuck you’ to the glossy, inoffensive work so celebrated by commercialism. 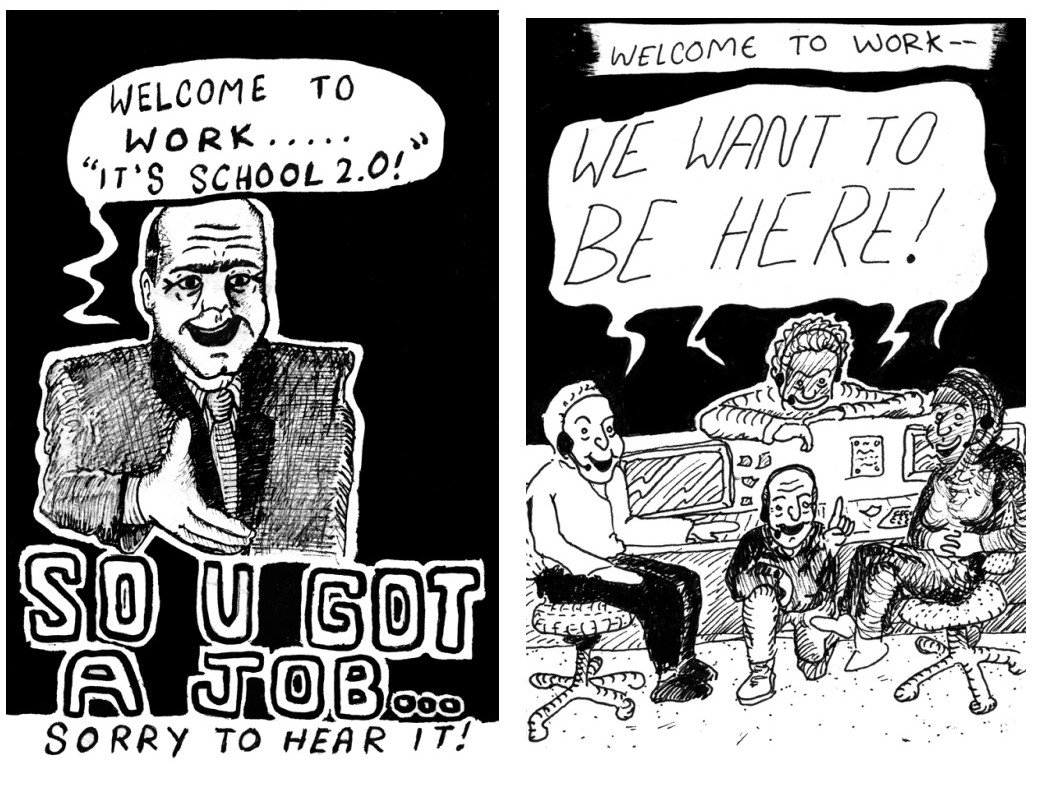 Another little-p artist I love is Bek Coogan. She is interested in testing accepted definitions of ‘art’ and the industry that surrounds, perpetuates and gains from them. Her work is an epic call to the wild, a cosmic middle finger to the self-serving, patch-protecting, mostly male gatekeepers and their paucity of imagination and empathy. Bek pulls from the earth and universe whatever medium or message she needs and sometimes this is comics. And you just know that cartoons that arise out of the soil and stars are powerful and political as fuck. 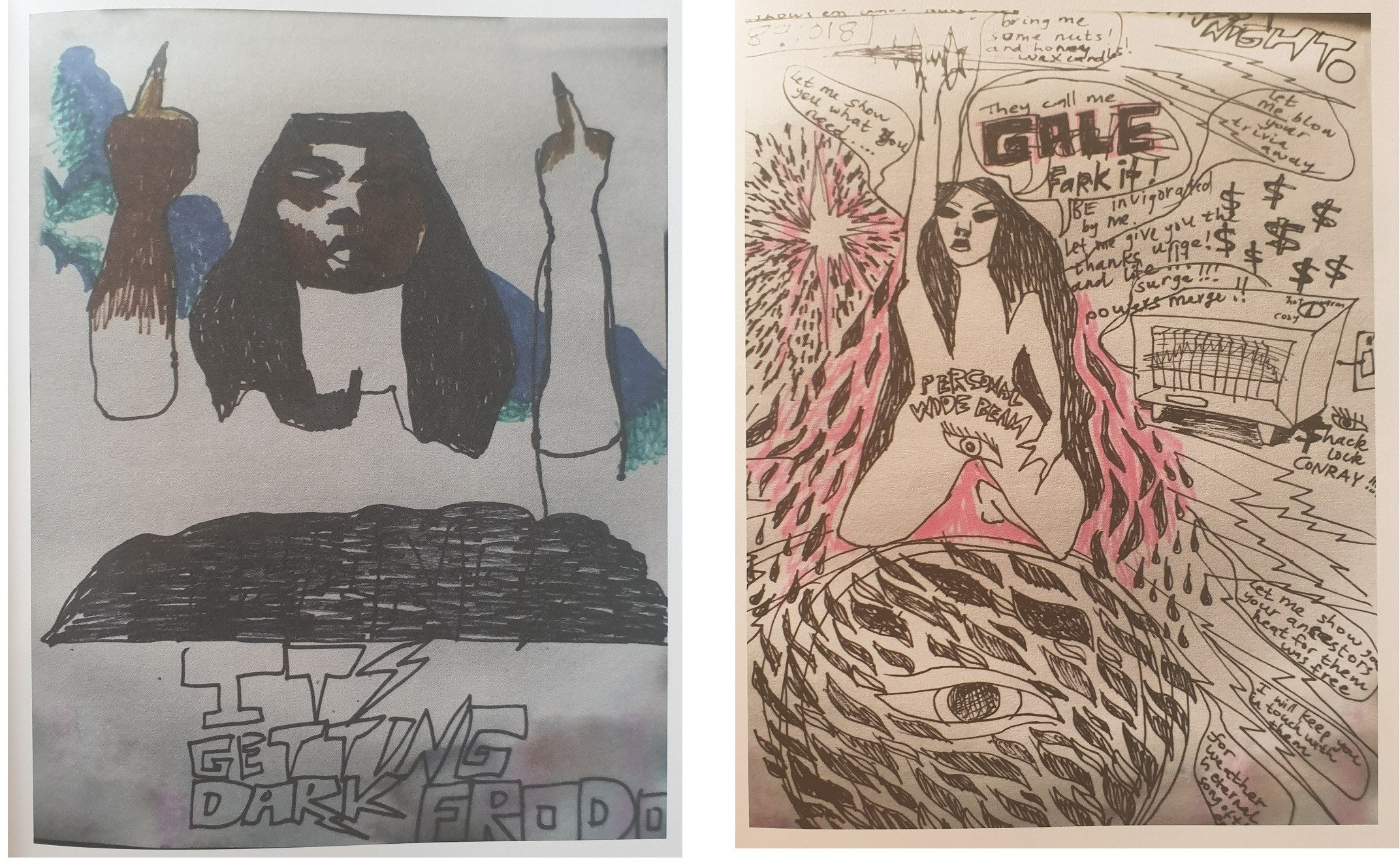 To wind up I’m going to briefly discuss Toby Morris, a middle-sized-p comic artist (hehe) who illustrates how the big-P/little-p distinction isn’t as neat and tidy as I’ve made it in this post. Toby draws the Side Eye which appears regularly in the Spin Off. It’s a very popular, useful and clever comic that uses big-P current events as a springboard for exploring little-p ideological structure and bias. Toby is very skilled at doing this in an effective and accessible way and his work reaches a much wider audience than the little-p comics previously discussed. This is choice.

The world needs all the types of political cartoons.