My comics are incompetent

Quite often when I describe my comics as ‘incompetent’ I am met with big understanding eyes and a gentle pat on the back. People say things like “don’t put yourself down” and “you have your own unique style” and “well I like your comics”.

I usually respond to these sentiments with a gentle exasperated “thank you”. I don’t make a fuss because I know people are being kind and because explaining takes quite an effort. This is because the concept of incompetent as it pertains to my comics is contrary, intensely personal, patently unfair, stupidly binary, illogical and of little to no practical application in the world; too difficult to articulate in person but clearly the perfect thing to write a blog about.

Incompetent is just for me

An important thing to say is that I try only to ever use the word incompetent in relation to my own comics. This is because, alongside my own obscure definition, incompetent has a more widely understood meaning which is about not being good at something. So when I call other people’s comics incompetent, it sounds like an insult.

But when I do call someone else’s comic incompetent (albeit secretly in my head) I mean it as a compliment. And I admire whoever has made the comic and therefore don’t want to insult them by paradoxically complimenting them on their incompetence. It’s just kinder and safer and easier to keep my mouth shut.

But I am happily incompetent

When it’s me though, I unashamedly use the word incompetent and I wield it in a few different ways. First I position incompetence as ‘other’ to the discourse I describe as ‘competent boy comics’. I have written before about what competent boy comics are and how they make me feel so will give the idea only as much airtime as is necessary here.

Unlike incompetent, to which I give a whole new happy meaning, competent in a comics context retains for me its usual definition – adequate, middling, satisfactory, tolerable, all right, average etc. It’s not a compliment and I don’t really consider it an insult. It’s just an accurate and useful description of a particular type of comic that I don’t want to make.

I also use the word incompetent as a catch-all descriptor for the things I love and think are special to the medium of comics and that I try to include in my work. These include things like punchlines, text and image interaction, gaudy frames, and what I call the 'illogical stillness'. I have written more about these things here.

The third meaning I attribute to the term relates specifically to my drawing and the way I mostly try not to draw things-that-look-like-things. This’ll be the focus of the rest of the post.

It is no big deal to be able to draw things that look a lot like they do in the real world. Often people ‘ooh’ and ‘ahh’ over someone’s ability to do this but in fact there is nothing magical or unattainable or genius about it. The drawing of things-that-look-like-things is a skill, therefore it can be learnt. I know this because as a school teacher I taught hundreds of kids how to draw things-that-look-like-things. This involved communicating a bunch of standard tricks and techniques and after learning and applying these, they could all do it.

I try not to

In my comics I try not to draw things-that-look-like-things. This can be hard because as stated, I know some of the tricks. I have not however been a teacher for ages so haven’t had to practice the tricks and happily they are almost forgotten. Not wanting to draw things-that-look-like-things does not mean though that I believe in some kind of patronizing Post-impressionist primitive comics condition; nor do I see my drawing in terms of spiritual unfettering or maintaining innocence or stream-of-consciousness pouring forth. This stuff grosses me out and has no place in my work.

My drawings are incompetent but they are deliberate. Just like competent boy comics they are the result of thinking and making choices (even if my choices are not always liked or understood). I purposefully, for example and as per below, make my panels minimal and flat and relentlessly similar without show-off backgrounds or razzmatazz movie angles. I am also resolute in the drawn necks that are too skinny for the heads they hold; the characters that don’t look quite the same each time they appear; how my home-made glued-on screentone is out-of-sync with the shape it’s meant to fill; and making the drawing secondary to the punchline always.

Kind of perversely I also work at getting better at this stuff. Just as some comic artists practice to get more competent, I practice to get less; to get more skillfully incompetent. I do this because I want to better reproduce the comics I have in my head, in the same way I presume any comic-maker does.

Unlike the ability to draw things-that-look-like-things I am not sure if my particular type of incompetence is something anyone could master. Maybe it is. I have this feeling though, that while anyone can become a photorealist, incompetence is individual. Incompetence is yours alone. 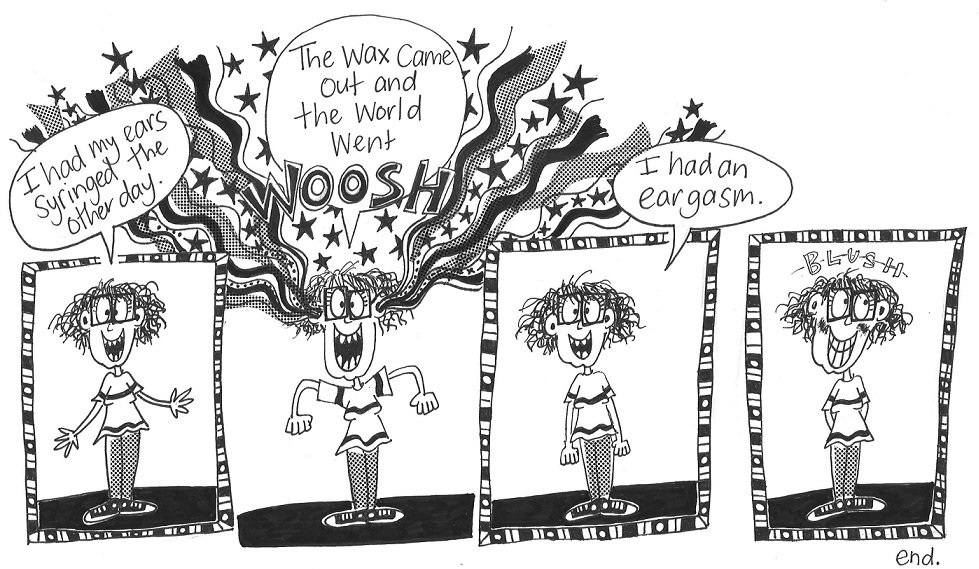