Spike Milligan did everything and also made comics

NB: Spike Milligan wrote in the mid 1900s and was a war veteran so there is some stuff in his work that's not ok. My position is that I consider the amount to be small, innocuous and context-specific. It does not cross any of my boundaries and is outweighed by the wonderfulness. You may feel differently and fair enough.

I named my daughter Lucy Spike. They are just names I like but somewhat embarrassingly, a few months after she was born, I realised they are both comic-related (if I had my time again, I’d definitely be more careful).

‘Lucy’ is obvious – good grief / the doctor is in / kissy kissy Schroeder / crabby etc. To many people ‘Spike’ is also obvious although not so much for comics as for a whole bunch of other stuff. But yes ‘obviously’ Spike Milligan.

Milligan is variously represented as a humourist, comedian, author, children’s author (apparently there’s a difference) actor, playwright, poet, illustrator, mental health advocate, national treasure, genius and the biggest influence on the universe in all of space and time (the best description though is the one he gave himself, “Spike Milligna, the well-known typing error”). Occasionally he is referred to as a cartoonist. This is because he was one and this is the thing I’m going to write about.

For a very brief time Spike Milligan contributed to the satirical magazine Private Eye but mainly his comics appear in his own books and relate to the stuff around them – poems, stories, themes, subjects etc. It’s in this context I am going to think about his work (so this post might be like a book report or author study or document analysis or literary inquiry but most likely it will be the usual comics rant).

The first Milligan book I’m going to discuss is one pretty much everybody knows, Badjelly the Witch (you can Listen to Spike reading it here). Often the comics in this are referred to as  ‘illustrations’ and because they help tell the story this is fair. But the word is also inadequate and vague. It does not specify ‘comics’ and everyone knows that comics can be their own wee self-contained word-and-picture worlds even when they are acting in service of something larger. This is how it is in Badjelly. The cartoons add to the main story but are also separate things. Like this - 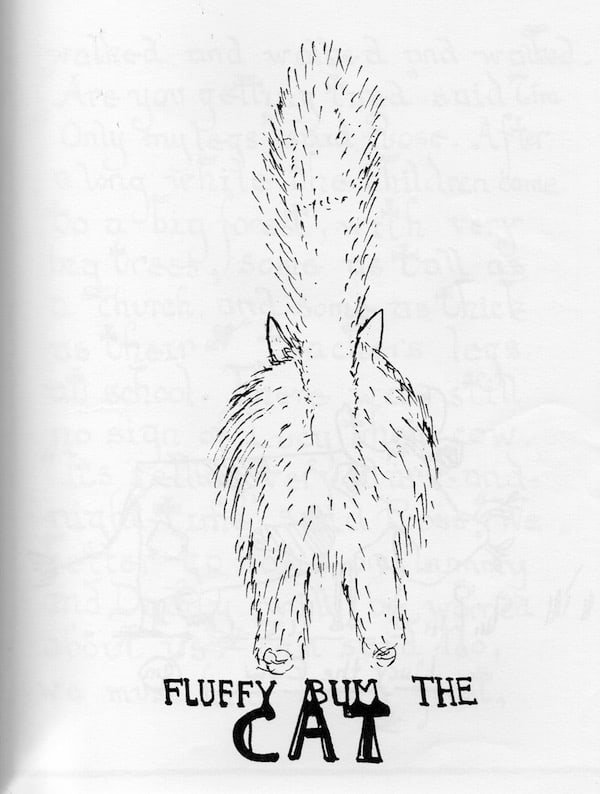 Fluffy Bum is a cat (duh) who is part of the story and therefore this image is an illustration. But take it out of the story and it still makes sense because it’s a comic with words and a picture and when these are combined the meaning is clear. All you need for the cartoon to work is the cat’s name and the corresponding picture of its arse.

The Badjelly illustrations also meet other Indira-Neville-criteria-for-identifying-proper-awesome-comics such as being funny - usually in a very silly scatter logical kind-of way; and being meta. That is these comics know they’re comics. They tell us by being obviously ‘drawn’ – incompetent and singular and symbolic rather than representational, and through their flatness – things are front or side on, none of this perspective palaver. Sometimes they also tell us explicitly like when Dingle Mouse uses a ‘talks bubble’ to tell Jim the Eagle that he’s using a ‘talks bubble’. It makes more sense in the actual comic - 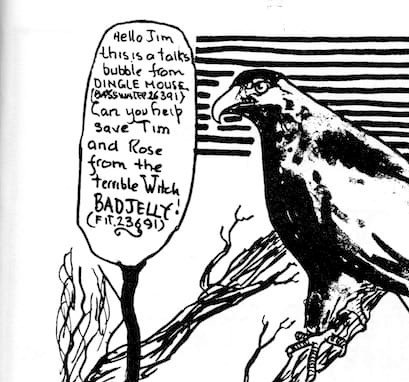 Now I’m going to move to Spike Milligan’s war memoirs, “a trilogy in seven parts” as he called them. These are about Milligan’s experiences serving in World War II and his return to real life in its aftermath. They are the most remarkable and gripping nonfiction books – the big story of the world and the tiny story of one person, hilarious and harrowing. You know, that whole humour/pathos thing (especially and achingly so for me because I have my father’s copies, his name in faded blue ball-point pen on every cover page).

In talking about the war memoirs I’m kind of going to partially backtrack on my main Badjelly point - that comics can be self-contained even when they are part of something bigger. In these books this is still true but less true and context is much more important (“do I contradict myself? Very well I contradict myself…etc etc”. This Walt Whitman quote has saved me more than once). But the word ‘illustration’ is still inadequate unless you use it to mean everything illustrates everything.

All seven books contain anecdotes, reflections, jokes, letters, sketches from the battlefield, official documents, ephemera, drawings by other people, photos, poems, facts, descriptions and diary entries as well as comics and all are linked. And these multitudes all contain further multitudes. The poetry for example is happy and sad, and there are limericks, one liners and extended verse.  It’s the same with the cartoons – some are drawn, some use photos, some co-opt art by others, some have more than one panel and some don’t, some are funny, some are sad, some are about real things and some are fantasy and some are a combination of any/all these things. Here is a selection in badly-taken photograph and badly-made montage form -

For some light relief after the war memoirs but also because it's cool, I’m going to end by talking about A book of Milliganimals. This is ostensibly a book for children about – guess what - animals, real and imaginary. The first part is a bunch of poems and comics and the second part is the story of The Bald Twit Lion (it's so good and you can read it here). The comics are in Milligan’s beautiful incompetent style and are joyous, like this one –

I think I will write about Spike Milligan and comics again because there are some other things to say. But right now I am done.