What I've learnt about conspiracy theory belief and mental illness

TW mental illness and all its usual associations.

Right now I’m curious about the link between belief in conspiracy theories and mental illness. This has grown out of discourse surrounding the recent Wellington occupation i.e. ‘Clearly many of them need mental health support’ and ‘who let this lot out of the loony bin?’ I have feelings about both statements. I chose to express the ‘needs help’ ones publicly (blog fodder) and the ‘loony bin’ ones privately with the individuals involved (friends who genuinely thought they were ‘just joking’ but who immediately understood my point through a ‘seeing skinny sad people and going ‘who let them out of the P.O.W camp?’ analogy).

This post isn’t so much an Indira-forces-her-thoughts-on-the-world kind of thing as a summary of interesting stuff I’ve found on the topic of conspiracy theory belief and mental illness. Let’s begin.

There are two main philosophies of conspiracy acceptance – particularism and generalism. According to particularists each theory should be judged on its own merits and not automatically discarded as a non-rational belief. This is because some conspiracies have been proven to be true e.g. Watergate, MK-Ultra, Tuskegee experiments.

Generalist state that yes sure but on the whole belief in conspiracy theories is irrational. They defend this position in the following ways –

The answer is yes but with the following caveats – only sometimes, not exclusively, not as any kind of definite cause and effect, and not in a one-size-fits-all way. Also the theories and knowledge are way more involved and intense than I present them and are continually evolving. I am just sharing my own understanding at this moment in time. Please keep all of this in your head as you continue.

Conspiracy theory addiction is made up of the same qualities as any addiction. It’s thought that because of environment, genetics, family background, personality traits, stress, trauma and/or high sensitivity, some people have an addiction propensity. For one or more of these reasons they’re driven to find something that makes them feel better. In these circumstances belief in a conspiracy no doubt feels quite nice. It offers a sense of control and belonging, a way to make sense of the world and the feeling of being enlightened and special (regardless of the theory on offer).

These feelings then hijack the recipients neurological pleasure/reward circuits  –

Addiction is not a moral failing or lack of willpower but a physical rewiring of the brain. For some people the wires connect lizards with world leaders with protein-shedding sheep.

The dark triad is the (somewhat glamorous and gangster) name psychologists use to refer to the personality disorders Machiavellianism, narcissism, and psychopathy. Numerous respectable studies have found links between these traits and an intensified conspiracy belief mentality.

All four personalities are characterised by arrogance, selfishness, a lack of empathy and doing whatever the fuck they want regardless of the context or consequences to others (all are overwhelmingly diagnosed in men. Just saying). Here’s a dummies guide –

It makes sense to me. I can see how a dark triad personality would be drawn into conspiracy theory situations and how their traits would act as cultural capital once inside. Fiercely held beliefs, staunch unwavering distrust of authority and a ‘we will prevail’ mentality are markers of success for the paranoid and proof of an individual’s devotion to the cause. Those with them are deserving of adulation. And the adulation spurs more arrogance and selfishness which spurs more adulation which means more arrogance and selfishness and so on and so forth possibly forever.

Psychosis, delusion and mania are symptoms of psychiatric disorders. Personality disorders like those of the dark triad are primarily about the ways people relate to others. There’s a cause and effect that - although awful - is somewhat logical and visible (e.g. a psychopath tells a fierce and convincing lie and the crowd goes wild). Psychiatric disorders make much less observational sense. They include schizophrenia, and bipolar and schizoaffective disorders and are about extreme emotional and behavioural patterns, how they manifest and interfere with personal function and their inconsistency with external realities.

Psychosis, delusion and/or mania are potential symptoms for most psychiatric disorders and/or side effects of related medications (although they’re definitely not inevitable and vary massively in presentation across individuals and conditions). The gist of their relationship to conspiracy theory seems to be that they’re not precursors to or effects of ‘belief’ but lived symptomatic realities. The two can look similar – singlemindedness, extreme antisocial behaviour, grandiosity, the espousing of unusual narratives, resisting arrest - but they are not the same.

By way of grim and extreme illustration - a conspiracy theorist might believe political leaders eat babies but they’re self-aware. They know they believe this, can explain why (even if it sounds bonkers), understand others don’t feel the same, and will take (comparatively) considered actions in the name of their cause. In contrast someone experiencing psychosis may see or hear a baby being eaten; someone delusional may know with every cell it’s happening; and someone manic may be compelled to do something outlandish about it.

This is a ridiculously hardcore example but the principle is always the same. For those the middle of psychosis, delusion and/or mania - little or large - whatever they see, hear, feel, do is real. Their actions are not a reflection of held beliefs or opinions in this world, but an actual lived experience in another. For some people realities flicker.

Things do get nuanced though, requiring the separation of psychosis, delusion and mania from the conditions that feature them, to understand. Individuals with schizophrenia, and bipolar and schizoaffective disorders can believe in conspiracy theories but do so for the same reasons as anyone else. That is no causal link has been found (in contrast to those with dark triad personality disorders whose traits make them susceptible). So they're involved in conspiracy theory belief activities and may experience psychosis, delusion or mania within them without it being caused by them.

I can explain none of this any more clearly than I have and I am weary of italics.

Everything I saw was real - 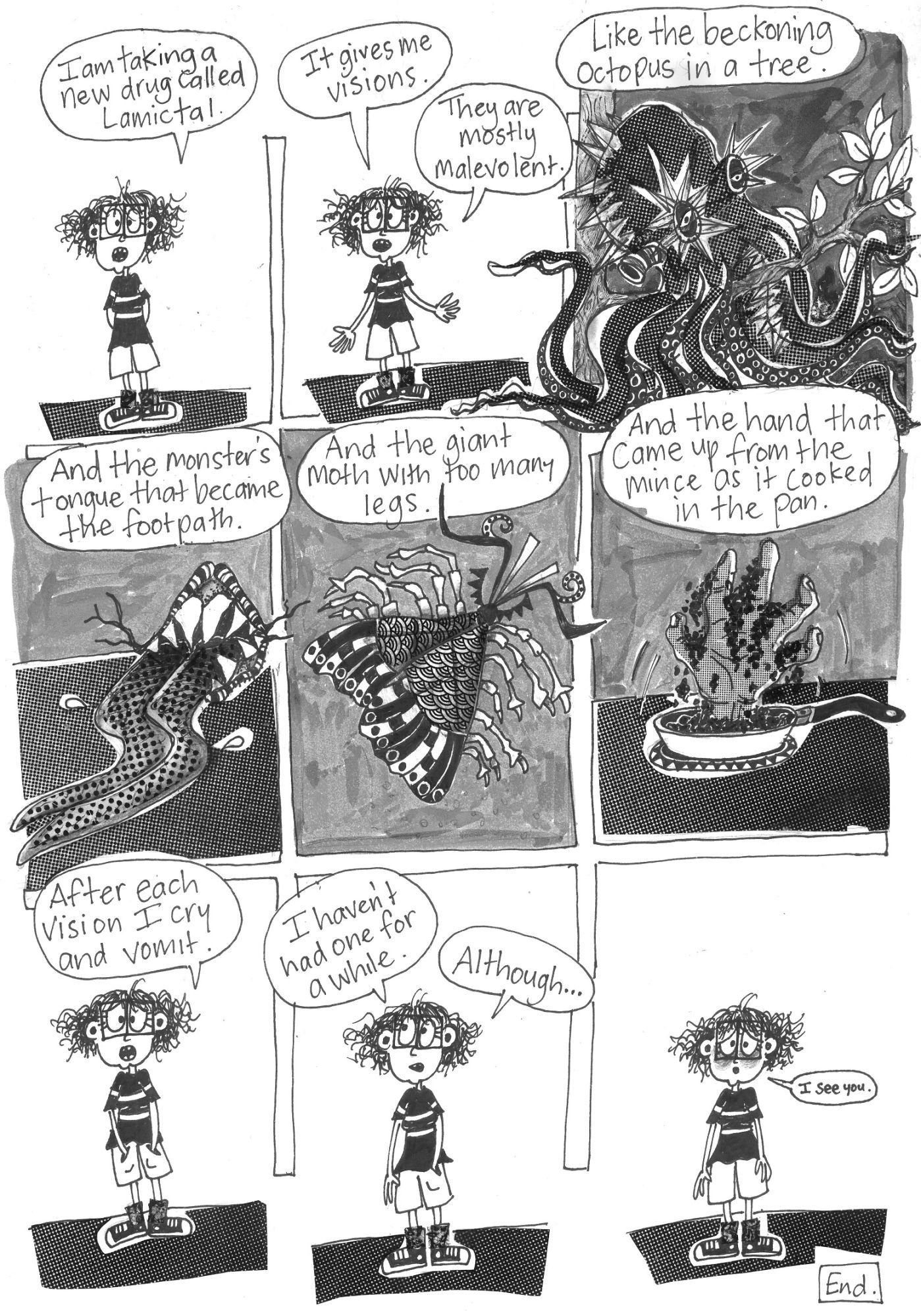