The other day I was sitting in my house and looking at my Asterix comics. I was thinking about how great their content is when suddenly I had a nerd epiphany! I realised that not only were these their own comics, they were also part of a larger comic, that of my bookcase – a not comic comic (bear with me, I’ll explain soon).

Once this happened I started seeing not comic comics everywhere and for a couple of hours got obsessed as I am wont to do. And as I am also wont to do I am sharing this obsession with the world.

What is a not comic comic? I doubt that not comic comics are something I’ve invented, that is the idea of identifying things that are not comics but share some of their characteristics. But I did manifest this particular version of the game and it has the following rules.

A not comic comic:

So! Based on the above, here are some not comic comics:

My bookcase: As I said this is the first not comic comic I noticed and it was the basis for the above rules.

My bookcase has frames in the form of book spines. These contain symbolic systems made up of text – who made the book and what it’s called; colours, which say something about the type of book - The Faraway Tree is a lime green, War and Peace is a blood red; condition, telling us how often/roughly/lovingly the book has been read; sometimes images, which are further information about the book’s content - my Moomin books all have characters on their spines; and usually a sign representing the publisher, the entity responsible for releasing the book into the world.

Together the spines tell the bigger story of how and what and why I read. The excessive number of spines signals that reading is very very very important to me. It tells which authors I love – the tattered multiple books by John Wyndham; and/or have given a try – my lone pristine Love and Rockets title. It discloses the genres and topics I am interested in –  children’s classics and sub-atomic physics. Anyone can see these things and read the story at this superficial level. But there are other layers of meaning, understood only by me. Like that the Spike Milligan war biographies belonged to my father, and that an old boyfriend wooed me with all the issues of Hicksville.

My bookcase is a very intense not comic comic.

My Tarot cards: This not comic comic is equally intense and even more complex than my bookcase.

Tarot cards are powerfully, intricately, unabashedly symbolic. Indeed that is their whole identity. With traditional decks the shapes of the frames (usually rectangular but I have a circular deck passed on by my mother); their direction (upright or inverted); and the figures, objects, landscapes, patterns, numbers, colours and words inside them all have reasonably established and consistent meanings. The Fool for example, is about new beginnings, the future, adventure, belief in the universe. When upright it tends to mean innocence, leaps of faith, originality and spontaneity; and when inverted, chaos, folly, lack of direction and poor judgement. There are lots of guides that explain this kind of general Tarot symbolism.

The specifics of each card however, change according to each reading. Their meaning is influenced by the type of reading given, the origins of the cards, what order the cards are drawn, which cards precede and follow on, the relationship between the reader and recipient,  individual circumstances, specific questions, and thoughts and emotions. Depending on the beliefs of those involved, things like the elements, the seasons, the moon, various deities can also impact.

So the over-all story told by this not comic comic exists in the form of uniquely personal permanent infinite potential.  My heart swells to think of it. But yeh it does sometimes do my head in.

Like those of the Tarot, the Periodic Table’s individual frames have a more or less fixed meaning utilizing a more or less common range of symbols. These are the element’s atomic number, electron configuration and sometimes an image or ACTUAL PART of the element (omg I love my version so much). Unlike the Tarot though, the not comic comic layout and meaning is fixed (although not always in the current way. There were drafts like Theodor Benfey's spiral periodic table. This was beautiful but pretty much incomprehensible ).

(Really) simply put the elements are organised according to their recurring chemical properties and periodic trends. There are seven periods (rows) with metals on the left and non-metals on the right. There are also four rectangular blocks associated with the filling of different atomic orbitals (look it up like I did).

Alongside the (completely fascinating) technical story, this not comic comic tells another. This is the story of infinity and life, again comparable with that of the Tarot,albeit it told in a different way (who says science and mysticism are not incompatible? Not me). The elements are the things that everything in the known universe is made from, so along with the atomic weight, each panel tells the rich and changing story of all the things a  particular element has ever been involved in since the time of the Big Bang. The Periodic Table as a whole tells the even richer, more dynamic and complex, utterly mind-blowing story of elements combined.

The Periodic Table of the Elements is figuratively and literally the most incredible not comic comic in all of space and time.

My scarf and my pill box: In terms of the cosmos these two not comic comics are very small and humble. In terms of my life however, they are very big and important.

My scarf was knitted for me when I was a child, by my Gran. It has panels in the form of stripes. Each panel is a colour selected because Gran thought I might like it and some have holes in them, which speaks to the age of the scarf. This not comic comic is the story of my Gran’s concern and love for me and that I treasure this.

My pill box sits on my bedside table. It is a not comic comic made up of deep rectangular plastic panels with lids that lift. Each has a day of the week and AM or PM written on it and contains the medications I need to take at that stated time. It is an interactive not comic comic and tells the story of my health, my desire to stay well, and one of the methods I use to try and achieve this.

Jigsaws, pizza and my balcony railings: These not comic comics tell stories that are not particularly intense or meaningful to me.

Jigsaws have lots of small symbolic panels that fit together to make a big symbolic picture in a “this is not a pipe” kind of way.*

Pizzas are cool looking with their  Dairylea cheese-esque triangle panels and overall circle shape. They are about satiating hunger and are the most delicious not comic comics on this list.

The railings on the edge of my balcony form long skinny panels through which I can see the soap opera-style story of the New Lynn Library carpark. Lots of interesting stuff happens there. It is an endlessly changing not comic comic.

Probably there are a million other not comic comics in my home. But as I am want to do (I love this phrase) I have moved on from this obsession.

#Thank you internet for hounding me until I bought this. I have never regretted the purchase.

*The jigsaw Ross Murray recently designed first made me think of this. 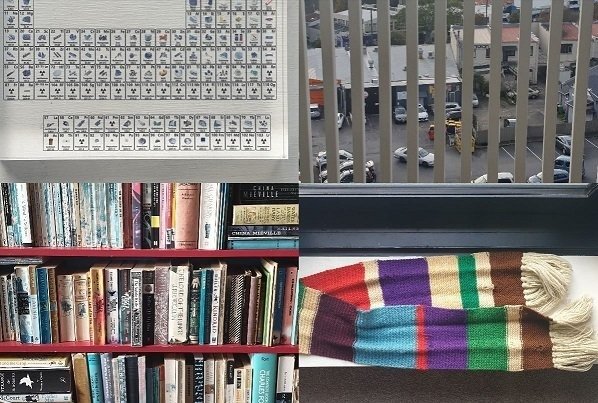