"You're almost handsome - for meat"

You know the Tin Man in the Wizard of Oz? This is his for real back story –

The Tin man was once an ordinary guy named Nick Chopper who in aptronymin fashion, made his living chopping down trees. His fiance was a Munchkin named Nimmie Amee. She worked for a lazy (and nameless) old lady, who was singularly un-thrilled at the thought of losing her best worker to domestic bliss. Nimmie Amee’s boss was so grumpy that to thwart the wedding she bribed a witch to enchant Nick Chopper’s axe.

The enchantment was brutal, causing the axe to cut up Nick Chopper’s body (while he was still alive). As each part was removed, his pal Ku-Klip the tinsmith replaced it with a metal prosthetic. Eventually Nick Chopper was all tin except for an empty space inside his chest. Ku-Klip had not made him a heart.

Without a heart he could no longer love Nimmie Aimee so Nick Chopper changed his name to The Tin Man and went to brood in the forest where he got rusty from the rain and met Dorothy and went to the Emerald City and received an organ transplant from the Wizard of Oz.

With his heart replaced, The Tin Man set off to find his lost love only to discover that alas! Nimmie Aimee was already married to a man named Chopfyt, a man constructed by Ku-Klip mostly from Nick Chopper’s own dismembered limbs.

The Tin Man then finds his old flesh head in a cupboard (Chopfyt didn't need it) and the two of them chat about personal grooming,

“You’re almost handsome—for meat. If your hair was combed, you’d be quite attractive.”

“How do you expect me to comb my hair without help?” demanded the Head, indignantly. “I used to keep it smooth and neat, when I had arms, but after I was removed from the rest of me, my hair got mussed”. 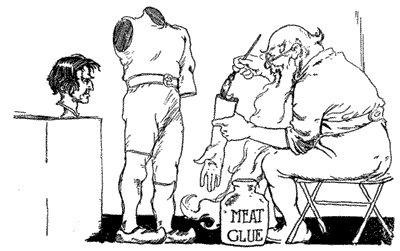 I know the story of the Tin Man because once when I was in hospital, I read all fourteen of Frank L. Braum’s Oz books on my phone. Yep, The Wizard of Oz is just the first in a series. Some of the books are the continuing saga of Dorothy but others are self-contained stories about the various creatures who live in Oz and surrounding countries.1 All are conveniently short and in the public domain. You can find them here.

The Tin Man’s horrific origins make up the twelfth book, The Tin Woodman of Oz (logical). His story is dark but it is by no means the only alarming thing to occur in the wonderful world of Oz.

Here are some of the others -

The land of the Scoodlers

from The Road to Oz

The Land of the Scoodlers is a rocky desolate place, not in Oz but next to it. The Scoodlers are ghastly nasty flesh-eaters, who particularly like a kind of soup made from captured travellers. They each have two faces, one either side of their detachable heads. These heads are also weapons, useful for throwing.2

Dorothy and some of her chums (not The Cowardly Lion or Tin Man) are taken by the Scoodlers and get very close to becoming soup but escape at the last minute. As they do the Scoodlers bombard them with a “shower of heads”. Dorothy et al manage however to catch the heads and throw them into a ravine, leaving the Scoodlers to sightlessly lurch about and bash into each other, knocking off all their limbs in the process. 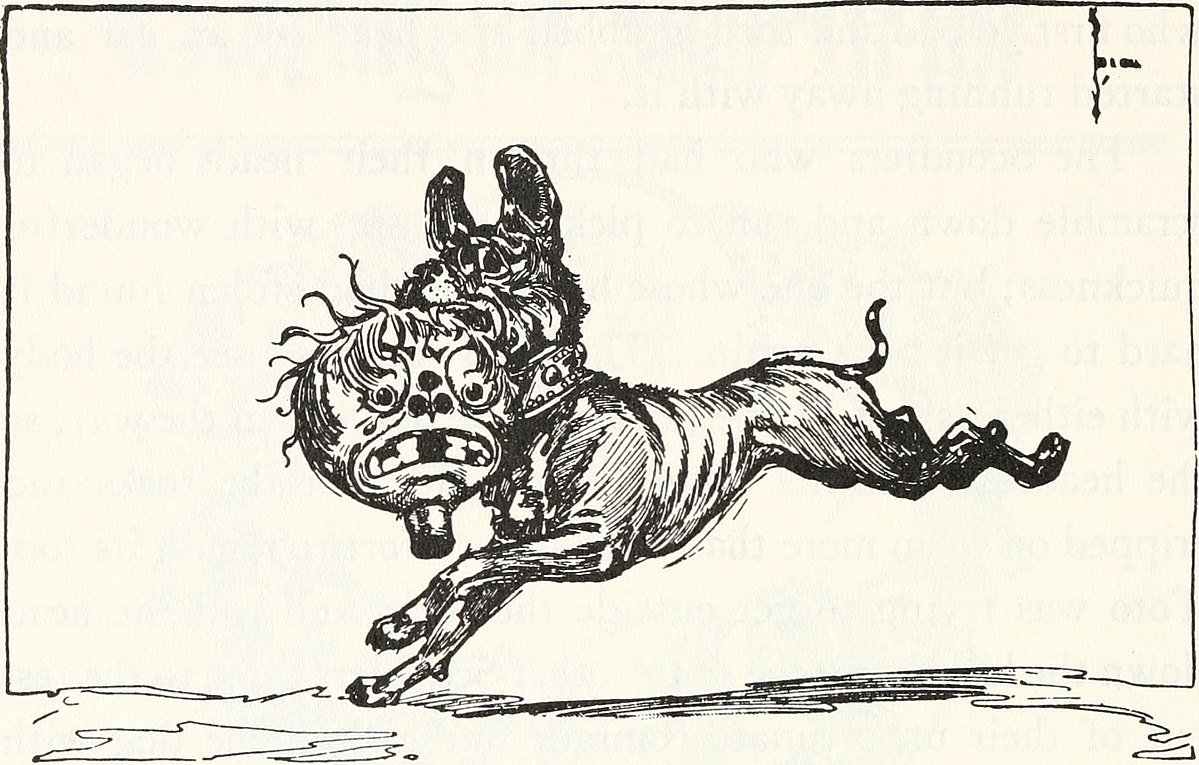 from Ozma of Oz

The Hungry Tiger is a friend of the Cowardly Lion (they have some sort of talking big cat support group) and he wants to eat babies,

“…I'm a savage beast and have an appetite for all sorts of poor little living creatures, from a chipmunk to fat babies."

"Isn't it, though?" returned the Hungry Tiger, licking his lips with his long red tongue. "Fat babies! Don't they sound delicious?”

The Hungry Tiger does have a conscience so doesn’t actually eat any fat babies but he does  go on for ages about crushing them in his jaws, way longer than is comfortable. 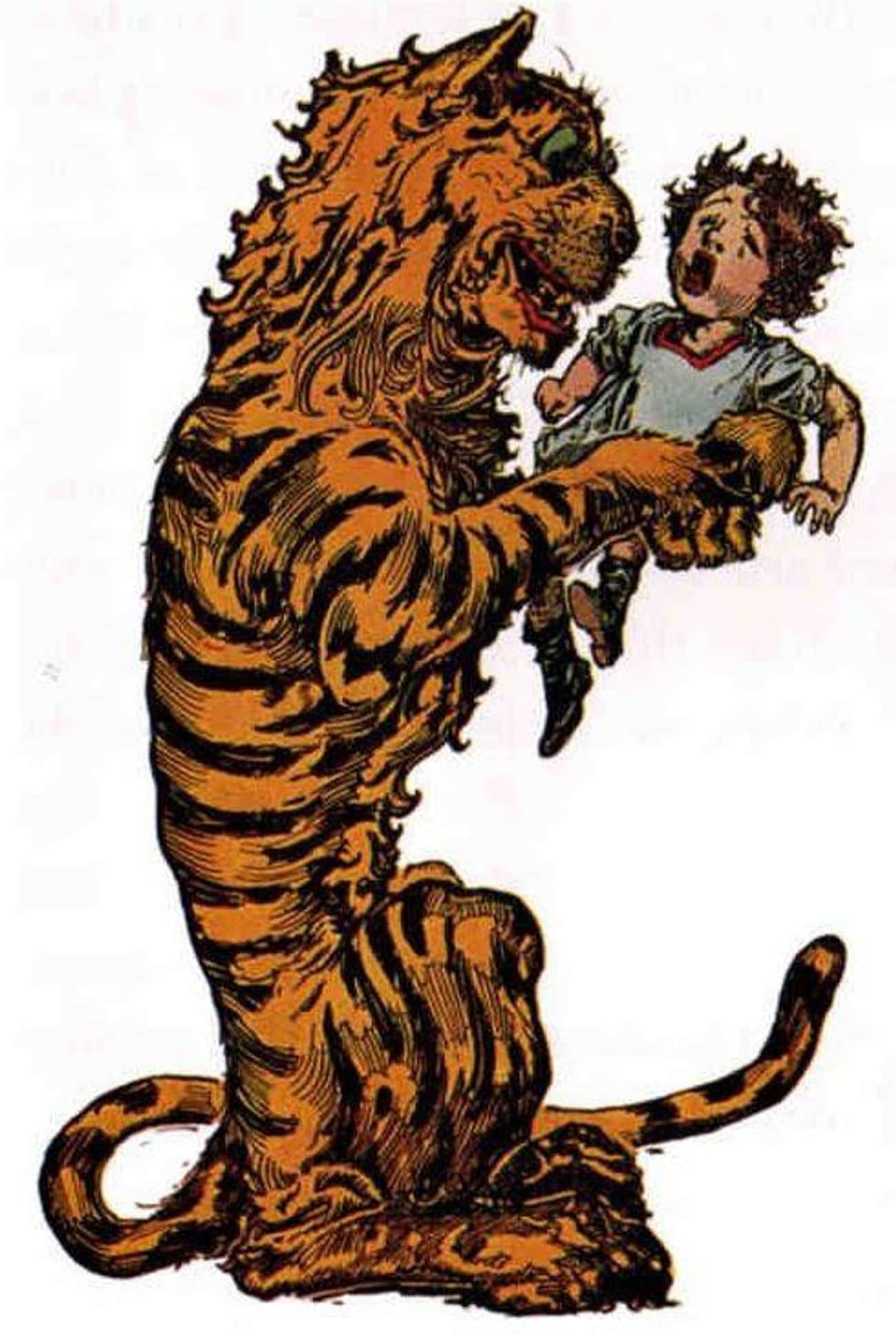 The Hungry Tiger and a fat baby.

first appears in The Patchwork Girl of Oz

A magician called Dr Pipt gets really sick of all the mice at his house so to catch them he brings a crystal cat figurine to life. The cat’s called Bungle and she remains transparent. Through her glass skin you can rather alarmingly see her brain – a mass of pink pulsating balls, and her heart – a beating red ruby. Bungle’s very proud of her cerebum and proclaims, “you can see it working!”

Bungle is not into the idea of catching mice because you’d be able to see them digesting inside her body (shudder). Otherwise she’s pretty much like regular cat; scornful, inconsiderate and lording her power over others. The Wizard of Oz decides Bungle is altogether too snarky and gives her an aggressive lobotomy, replacing her pink ball-brains with clear ones. Post-op she’s docile and obedient and everyone likes her much better.

Bungle the glass cat, complete with visible brains and heart

from The Wonderful Wizard of Oz (but omitted from the movie)

In the South of Oz, deep within an enchanted forest is a community of sentient porcelain dolls. During a visit Dorothy and company manage to knock over and partially smash several of them. Strangely the damaged dolls aren't furious and acceptingly join an existing mass of dolls with permanently chipped, splintered, cracked and inexpertly glued together bodies and faces (there’s definitely a porcelain-mending gap in the market).

Also some of the dolls are clowns. Doll clowns. One has a hundred cracks in his head and a jaunty red mis-glued mouth. So creepy.

One of the awful china clowns, thankfully not the one with 100 cracks.

from The Patchwork Girl of Oz

Scraps is not so much ghastly as she is a total weirdo (she’s also my favourite Oz inhabitant). Like Bungle, she was bought to life by Dr Pipt (he has this magic powder and is addicted to animating lifeless shit). Dr Pipt’s wife, Margolotte made Scraps especially with the idea that upon awakening she’d be an obedient servant.

“The head of the Patchwork Girl was the most curious part of her… The hair was of brown yarn and hung down on her neck in several neat braids. Her eyes were two silver suspender-buttons cut from a pair of old trousers, and they were sewed on with black threads, which formed the pupils of the eyes.

Margolotte had puzzled over the ears for some time, for these were important if the servant was to hear distinctly, but finally she had made them out of thin plates of gold and attached them in place by means of stitches through tiny holes bored in the metal. Gold is the most common metal in the Land of Oz and is used for many purposes because it is soft and pliable."

Scraps was also given a brain. Margolotte squashed it full of good servant qualities like obedience, aimiability and truth but a Munchkin called Ojo secretly added courage, ingenuity, self-reliance, cleverness, whimsy, and the ability to learn. These attributes meant Scraps was not content to be a servant and so escaped for a life of adventure. In this she did many interesting, exciting and crackers things and fell in love with The Scarecrow who she pretty much stalked. As with all great stalking relationships they eventually got together.

There’s this great scene where Scraps and The Scarecrow think they should sleep together (literally not euphemistically) because that’s what married “meat people” do but neither of them has eyelids to close so they blindfold themselves and lie down and pretend-sleep. As Scraps says, “who would know the difference?” and as The Scarecrow replies, “who would ask?”

The Oz books contain many many other intense things like the character Jack who has a pumpkin head that’s continually rotting; the Flatheads who have no craniums so carry their brains around in tins in their pockets; Phanfasms who get off on making happy people unhappy; when Toto the dog casually eats one of the peaceful pastry people in bakery-town; and Princess Langwidere who harvests the heads of maidens. There’s also that time The Tin Man chopped the heads off forty wolves and ended up victorious in a pool of blood. He is a worry.

It is a different thing but no discussion of Oz disturbing-ness would be complete without a mention of the 1985 movie, ‘Return to Oz’. This was made by Disney as a sequel to the 1939 classic, and was marketed as whimsical, family-friendly fantasy. FUCK NO. It is a surreal nightmare.3

Return to Oz has become a cult classic with a rabid fanbase who've written heaps about it. Here and here are a couple of pieces that thoroughly dissect the extended unfathomable horror of the film. I’m just going to give you a taste by briefly describing the opening scene. And man is it bleak.

Basically It's been six months since Dorothy returned home from Oz and during that time she’s become increasingly depressed, obsessed with Munchkins and unable to sleep. Worried, Dorothy’s family place her in an insane asylum and organise for her to have electro-shock treatment. Although she escapes the zapping, she mentally fractures and becomes two Dorothy’s – one a brunette who lives in the ‘real world’, and one a blonde who resides in Oz. From there it becomes a roller coaster of real or not real but always alarming adventures 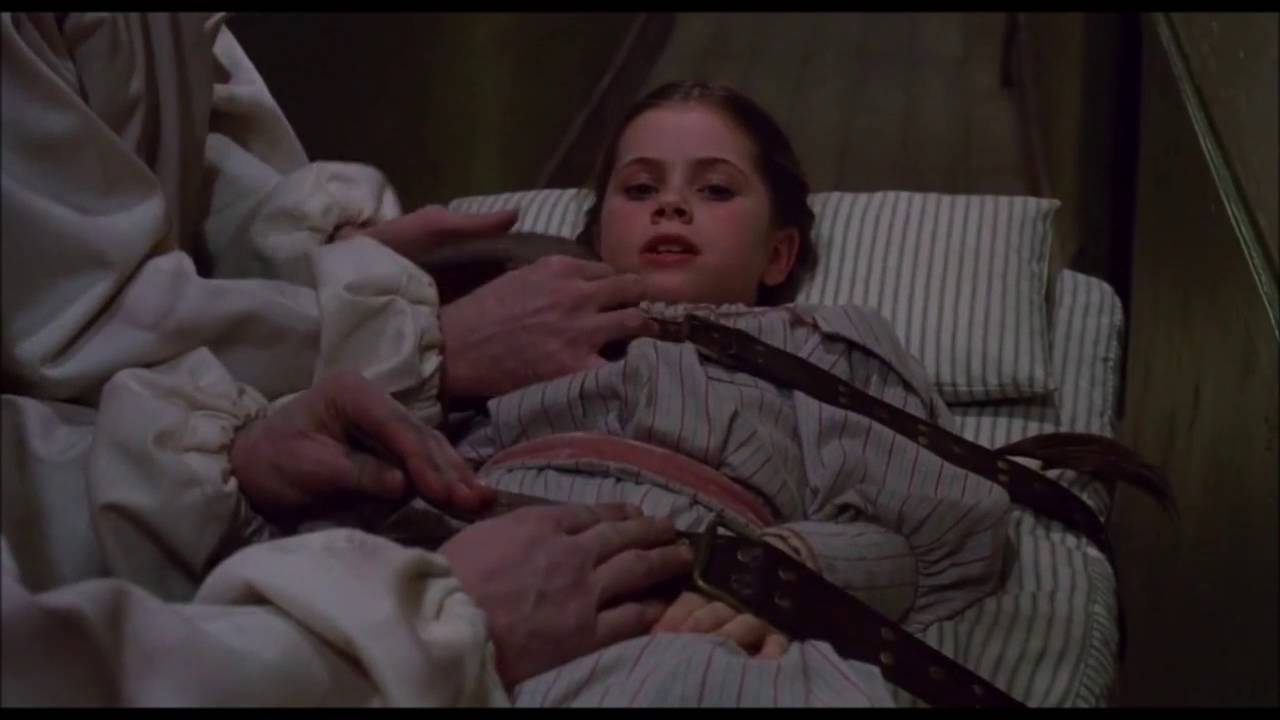 Return to Oz, the opening insane asylum scene. It really sets the tone.

There are lots of other non-Judy Garland Oz movies. Here’s a handy list.

And one last interesting Oz thing: all the illustrations on this page - and in the fourteen original books - are by W.W. Denslow. He used his Oz earnings to buy an island, build a castle and proclaim himself King Denslow.

1 There are actually way more than fourteen Oz books. These are just the ones by the original author Frank L. Braum. Here's a full list.

2 Frank L. Braum was obsessed with decapitation and it is all over the Oz books. Someone has collated all the incidents into this useful list.

3 Return to Oz is based on a combination of the books ‘Ozma Of Oz’ and ‘The Magical Land Of Oz’. Kind of.